Pat McAfee is a former American football punter and a celebrated athlete who has fifteen years of on-field experience. As the statement “Jack of All Trades” goes, McAfee is involved in almost everything and is seen everywhere.

At the moment, the former Colts’ punter is active as a sports journalist, podcaster, and, not surprisingly, a professional wrestler.

Yes, you heard right! Pat is active as a wrestler for WWE on their NXT brand. However, none of these can come even close to his NFL glory days.

Pat participated in the national competition, which highlighted the best goal-kicking prospects in the USA.

During his eight-year-long career in the NFL, McAfee made two Pro Bowls and was even an All-Pro back in 2014.

There is more amazing stuff about Pat, both on-field and off-field, more or less. Stick with us till the end to find what they are! But first, let’s kick start with some facts.

Besides, Pat grew with his brother Jason McAfee. But not much is known about him.

Likewise, McAfee attended Plum High School in his hometown of Pennsylvania. As a teenager, he enjoyed playing football and soccer.

You would also like to read about Top 69 Pat McAfee Quotes.

As a freshman, McAfee started his job at West Virginia Mountaineers. Pat had 70 kickoffs in a single season with 20 touchdowns. One of the memorable moments during his freshman season was against Louisville.

The game ended 46-55; during the game, Pat had a successful onside kick.

During the game against Georgia Tech at Gator Bowl, the West Virginia Mountaineers went on to win the game. The team also won ten games during the event.

Furthermore, during the Fiesta Bowl, he completed the season with two for four performances, with one kick blocked by Oklahoma. In addition, Pat was named to the ESPN All-Bowl Team.

During the 2007 season, Pat was named to Lou Groza Award semi-finalist in the best collegiate kicker category.

Moreover, in 2007 he earned the Big East Special Team Player of the week three times. In addition, Pat and was named second-team All-Big East.

Besides, he earned West Virginia’s Scott Shirley Award for a second consecutive year.

Pat then began his senior season against Villanova. The game ended with a 48-21 victory. Moreover, he kicked two field goals, including six extra points, two punts, and career-long 52 yards.

Following the win, he also became the record holder in school for all-time-scoring passing Slaton against a 27-3 win against Marshall. 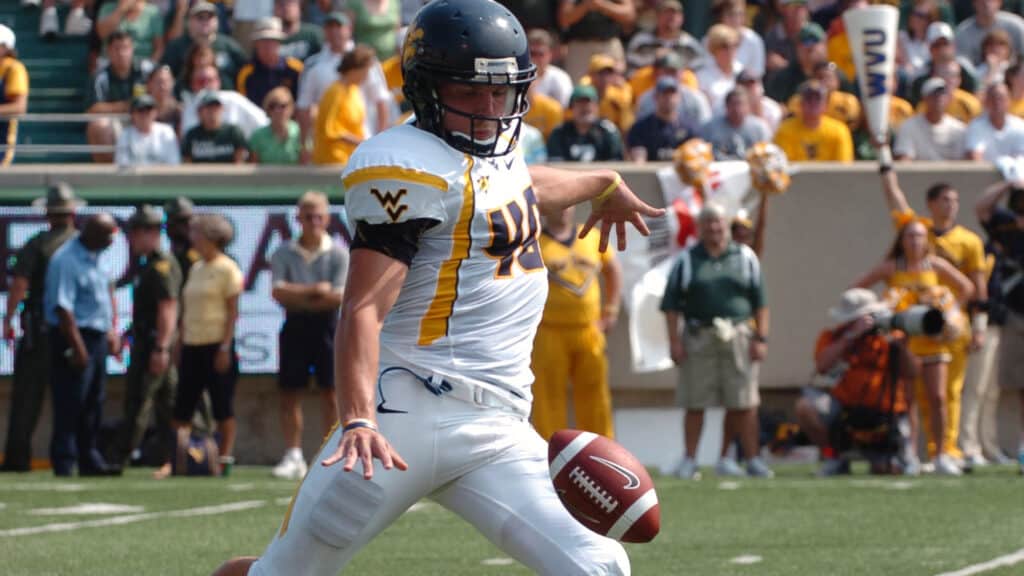 Similarly, he had a fantastic performance against Cincinnati during the same season. Just like that, McAfee ended his senior year with 44.7 yards per punt average, which is his career-best.

In 2009, he was invited to the Senior Bowl in Alabama after his senior season at WVU (West Virginia University Athletics).

Pat started as a kicker in the Senior Bowl. In addition, he also played in the 11th annual State Farm College Football All-Star Challenge.

In 2009, McAfee was drafted by Indianapolis Colts in the NFL. Furthermore, during the same year, he handled kickoff and punting duties for the Colts.

In addition, Pat posted a 48.2- yard average on punts. Later, he declared his signing of a five-year contract with the colts.

Moreover, he was named AFC Special Team Players of the month in September of 2014.

On February 2, 2017, Pat announced his retirement from NFL after completing eight seasons. Moreover, he expressed his intentions to take part as a contributor in Barstool Sports.

As an athlete, McAfee has a tall build and a muscular body. He stands at 6 feet 1 inch and weighs around 233 lb. 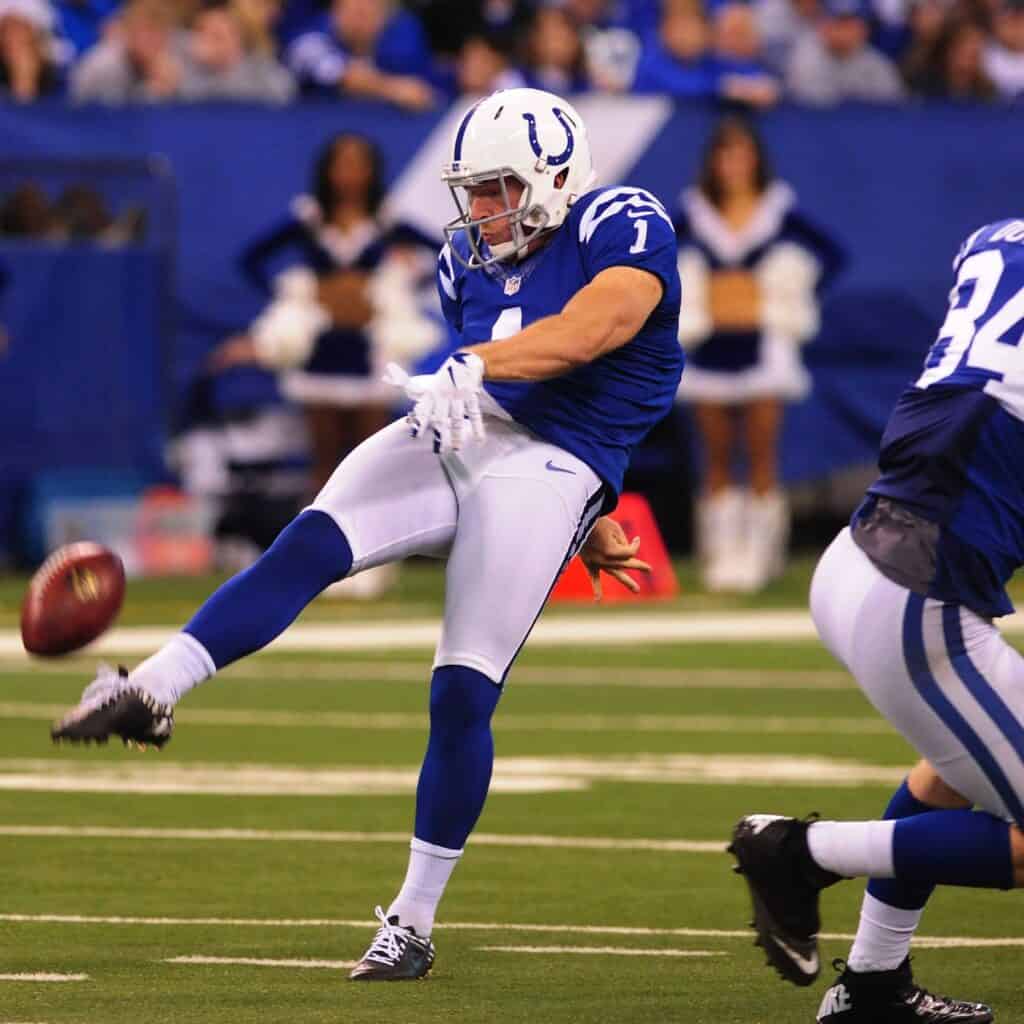 Currently, the all-rounder is in an adorable relationship with his long-time girlfriend, Samantha Lynn. Pat’s future wife Samantha is the founder “Fur The Brand.”

It is a foundation dedicated to bring awareness and help find homeless animals a home.

I finally asked @Sami_lynn24 if she’d spend forever with me… She said yes, we both smiled, laughed, and cried a bit in front of a waterfall and then ate sandwiches in front of the bird that flew us there… Yesterday was awesome. I’m the luckiest dude on this here planet. pic.twitter.com/f55vPSeqlk

On February 10, 2019, Pat proposed to Samantha in style. The couple shared their engagement moments with a fantastic waterfall as the backdrop.

Surely, the news shocked fans all over the world, and many of them congratulated him on social media. The couples then shared their wedding vows and tied the knot on August 2, 2020.

Yesterday was a great day.. My lady & I said “Yup” to forever together in front of a great group of humans.

My wife is the best & an absolute rocketship..I’m the luckiest man to ever grace this here planet, I appreciate you all more than you could fathom 4 following along.

Well, we would like to wish nothing but happiness to this beautiful couple. As a matter of fact, the two have been enjoying their blissful life so far.

You would also like to read about Bob Sapp: Football, Movies, Wrestling, Facts & MMA >>

Following his fifteen years in the NFL, Pat announced his retirement with the Indianapolis Colts on February 2, 2017. During his eight-season in the NFL, Pat was named PFWA all-rookie Team, Pro Bowl, First-team All-Pro, and First-Team All-American.

McAfee later set his sight on the entertainment industry. In addition, he made a guest appearance for NFL and Fox Sports’ college broadcasts in late 2018.

Furthermore, in 2018 he also appeared on NXT Take Over events. Then in February 2019, he signed a contract with the company for live watch-along pay-per-views.

In addition, in July 2019, he was also announced by ESPN as a part of Thursday Night College Football.

Similarly, Pat started his show that was titled the Pat McAfee Show.

Besides his various appearances on NXT, the former athlete has been active as a podcast host. He made his broadcasting debut on November 24 of 2018, with Fox.

On the show, he, along with his friends, offers their opinions on recent sport events. Moreover, Pat delivers a fresh take on entertainment and sports.

Fans and listeners from across the globe love him for speaking his mind. Also, since 2019, McAfee has been making regular appearances on ESPN’s College GameDar.

WWE has a long history of celebrities and athletes stepping into the ring for the special attraction. It certainly excites the crowd and grabs their attention. 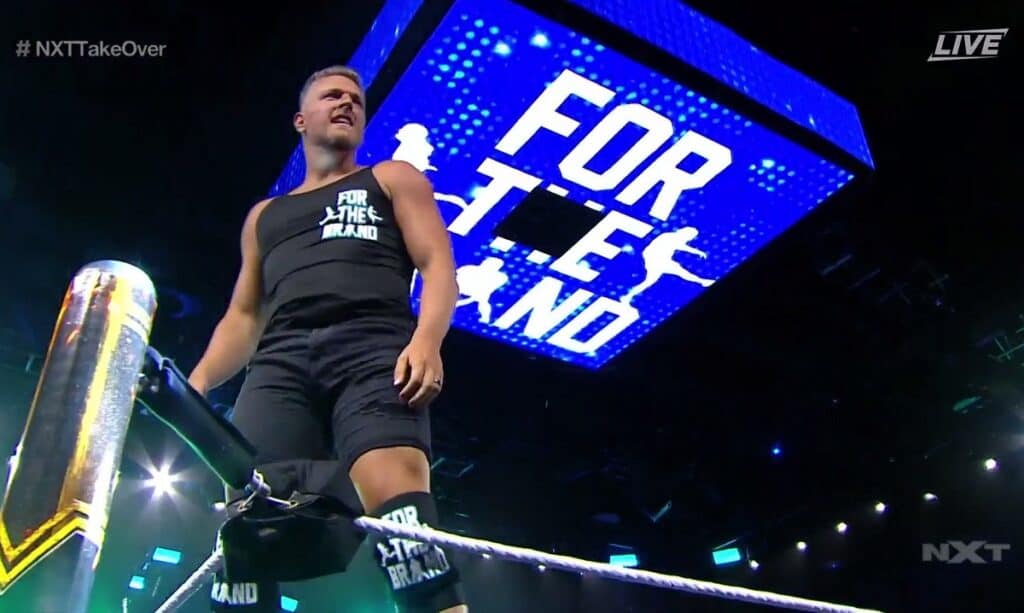 According to Dave Meltzer, Pat will not be making any more appearances on WWE. 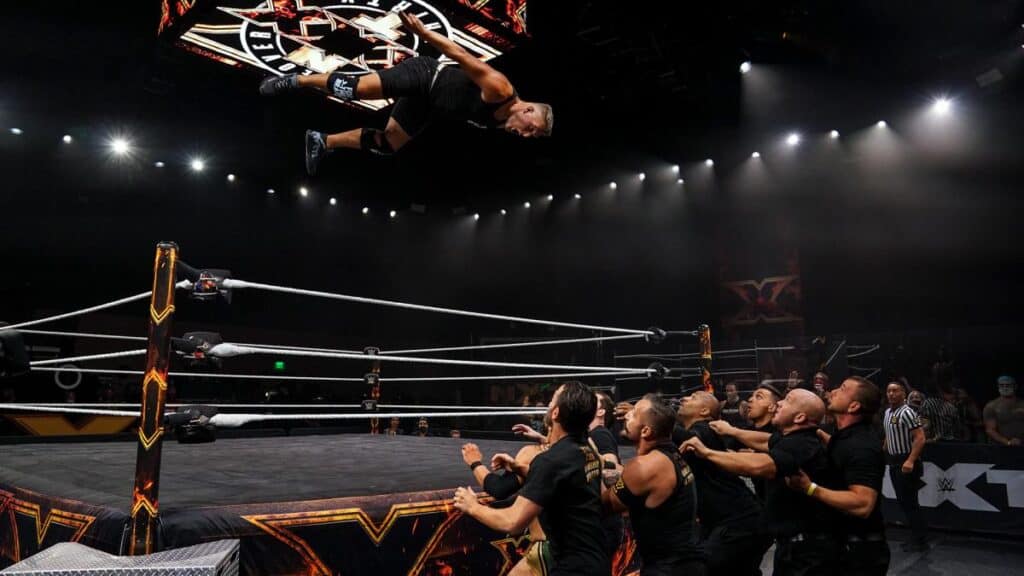 WWE made the decisions with the intent not to overexpose Pat McAfee. The news also states that WWE’s call and Pat will be out of T.V. appearance for a while.

I think I got fired on Christmas. pic.twitter.com/FOTP1A1qTH

Kicking balls and the scoring goal was not the only skill Pat has. The punter has also put on a special Stand-up comedy show. This special event took place at the Palladium in Carmel.

As per ESPN reports, the show performed by Pat was sold out. Pat McAfee Foundation conducted the show. It is a nonprofit organization dedicated to offering academic scholarships to children of U.S. military personnel.

During the show, he joked about why he chose the number 1, when a lion got loose on the West Virginia campus, introduction to Peyton Manning, the New England Patriots, and many more.

You would also like to read about Miles Boykin Bio: Football, Career, NFL, Family & Net worth >>

Throughout his career, Pat has earned over $19 million from his salary. He signed an attractive 5-year $14 million contracts in 2014 with a guaranteed $5 million.

Pat had earned around $4.7 million with his team during the previous five seasons. His current net worth stands at around $8 million.

He has over 890k followers on Instagram. You can find him on the platform under the user name @patmcafeeshow.

Is Pat a professional wrestler?

No, Pat is not a professional wrestler. However, he has made an appearance on NXT.

Yes, you can find out about his late content on The Pat McAfee Show.

Does Pat McAfee have any children?

No, he does not have any children but the couple is looking forward to starting a family.

Is Pat McAfee on Twitch?

No, he is not on Twitch.

Not everyone is victorious in their career, but it is not difficult to be amongst the best with dedication and enthusiasm. Denis Shapovalov is...
Read more

Brandon Carlo is a big name in the American ice hockey universe. He achieved it with his hard work and passion for ice hockey. Brandon...
Read more

Amile Jefferson is one of the finest basketball players we cannot miss. He serves as a Power Forward for the Lakeland Magic of the NBA G League. The...
Read more

Gordon Hayward is an American professional basketball player for the Boston Celtics of the National Basketball Association (NBA). He has broken several records and has...
Read more

Everything You Need To Know About Tom Brady’s Kids!