This article was last updated by Kushal Katuwal on January 11, 2023

Sammy Sosa is a Dominican-American former professional baseball right outfielder who played in MLB for 19 seasons, primarily with the Chicago Cubs. Before that, he played for Texas Rangers and Chicago White Sox.

Sosa is regarded as the game’s best hitter, who hit his 400th home run in the 1,354th game and 5,273rd at-bat, reaching the milestone faster than any MLB player.

The Chicago Cubs right fielder was involved in the most thrilling home run race in baseball history in 1998 and developed into the most well-rounded and loved player in the early 2000s.

The baseball right outfielder became the 7-time All-star record while holding numerous team records. He finished his career with the Baltimore Orioles and the Rangers for a second time.

Unfortunately, Sammy wasn’t included in the National Hall of Fame candidacy on January 25, 2022, as part of the Baseball Writer’s Association of America ballot.

With only 18.5 percent of the vote, Sosa fell far short of the required 75 percent needed for the election. Besides him, Barry Bonds, Roger Clemens, and Curt Schilling also fell off the ballot.

The article details his biography, wife, net worth, and kids. So, please read the whole article to know everything about him.

Before getting into details about the baseball player’s life, here are some quick facts.

Sammy Sosa was born on November 12, 1968, in San Pedro de Macorís, Dominican Republic, to parents Juan Bautista Montero and Lucrecia Sosa and is of Haitian descent.

His father, Juan, was a farmer who passed away when he was seven. The athlete’s mother raised him and his four brothers and two sisters independently.

His family lived in an abandoned hospital while Sosa used to polish shoes, sell oranges, and work as a janitor in a shoe factory to contribute financially and help his mother run the household.

Sammy started playing baseball at 14 but used a tree branch instead of a bat, a milk carton for a basketball glove, and a rolled-up sock as a ball.

At only 15, the Philadelphia Phillies tried to sign him but couldn’t, as the player must be a minimum of 16 years old to play in Major League Basketball (MLB). Sammy played for some local league during that period.

A Texas Rangers scout invited the then 16-year-old Sosa to a tryout five hours away from where he lived. Convinced by the little boy’s determination, Omar Minaya offered him a $3,500 signing bonus.

He used rewards to buy a bike and gave the rest to his mother. Sosa made his professional debut on June 16, 1989, against the New York Yankees.

As a November born, Sammy’s zodiac sign is Scorpio, indicating that he is passionate and living life to the fullest.

Moreover, he has an athletic build body as he regularly hits the gym and eats a balanced diet. Brown eyes and black hair are his distinctive features.

Samuel played in the MLB for almost 18 years of his life. He started his career with the Texas Rangers and ended with them too.

Early Career With The Texas Rangers And Chicago White Sox

The athlete made his MLB career debut with the Rangers on June 16, 1989. He wore jersey number 17 and had a promising career with the Texas team.

Later, the Rangers traded him to the Chicago White Sox, where he batted .233 with 15 home runs, 70 runs, ten triples, and 32 stolen bases.

Sammy played a few seasons with Sox before being traded to the Chicago Cubs. The baseball right fielder initially played well with the Sox but subsided a little later.

In 1992, Sox traded the 24-year-old to the Cubs, where he had the most notable moments of his career.

He improved as an overall baseball player when he played for the Cubs. Sammy was first named to his first All-star team in the 1995 season.

Sosa slammed 66 while McGwire made 62 home runs that ultimately broke the record of Roger Maris’s 61 home runs. As a result, they received a lot of media and fans’ attention for that home run record chase.

In the 1998 season, the now-millionaire made 20 home runs and knocked in 47 runs, which was MLB’s most significant offensive outburst.

Moreover, he also received the Most Valuable Player Award in the National League after leading the Cubs into the playoffs in 1998.

Sosa and McGwire were awarded the Sportsman of the year award by the Illustrated Magazines in the 1998 issue.

The baseball player was honored in the Ticker-Tape parade and invited to be the guest at Bill Clinton’s 1999 the State of the Union Address. He also received the Babe Ruth Home Run Award for leading MLB in homers.

After making 64 home runs in 2001, he was the first baseballer to hit over 60 home runs three times. Sammy was also voted for and won the Silver Slugger Award for his offensive output.

In the 2003 season, Sosa was thrown out of the game and later suspended for seven games after playing with a corked bat.

The incident led to inspections of 76 of his other bats and 5 Hall of Fame bats, which were clean and cork-free. Later, Sammy apologized, insisted that it was an honest mistake, and only used the bat while practicing.

After the 2004 season, the Cubs traded him to the Baltimore Orioles. Unfortunately, the former player did not have a spectacular career with the Orioles.

As a result, the Orioles team didn’t offer him a contract. He served as a free agent for some time, and the Texas Rangers acquired him for a minor league.

Sammy played for the minor league at the end of his career and competed against newbies for a spot.

The player initially declined the contract but accepted it later. Nonetheless, he played in the 2007 season and took a year off in 2008 amid retirement rumors.

However, he chose not to retire and wanted to test the waters of being a free agent. The Dominican player expressed his desire to play in the World Baseball Classic but did not make it to the roster.

Finally, on June 3, 2009, he announced his retirement from baseball.

Why Did Sammy Sosa Retire?

Sosa didn’t have many offers to play for a significant team. On top of that, the steroid scandal also contributed to his retirement.

Sammy has continuously emphasized that he does not want his legacy to be remembered as a baseball steroids scandal.

The father of six stated that his love and respect for the game kept him going and not the drugs. He further said he was best because he worked hard and stayed in his career.

Throughout his career, Sammy Sosa has maintained several titles, some of which are listed below.

Some Interesting Facts About Sammy Sosa

The former Cubs player was previously married to Karen Lee Bright in 1991. However, their marriage lasted less than one year, and they divorced the same year.

There were rumors that they might’ve ended their relationship due to Sammy’s domestic violence inflicted on Karen. However, it is yet to be verified.

Furthermore, their eldest daughter, Keysha, is majoring in the arts.

The former athlete is very involved in his children’s lives and is a loving and caring father to all six children.

Growing up poor and without a fatherly figure, he puts a lot of effort into giving his kids the best life they deserve and being an exemplary father.

The former baseball player has a net worth of $70 million in 2023. He earned around $120 million solely from his MLB salary.

Moreover, he made over $10 million from his brand endorsements alone.

He had dozens of endorsement deals, some million-dollar deals with brands like PepsiCo, Montgomery Ward, Latin American telco TriCom, etc.

A few months earlier, Sosa’s old video of him sprinting to his position while holding an American flag was trending on Twitter, the Cubs’ first home game following the 9/11 attack. 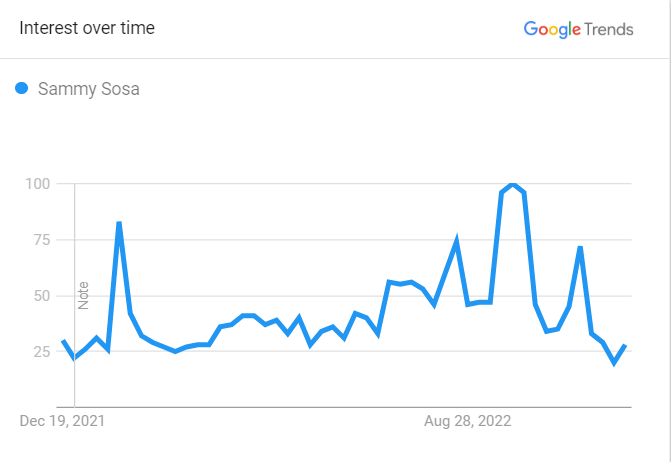 Sammy’s Graph For 12 Months (Source:googletrends.com)The above picture shows his search chart in the last 12 months.

How much is a signed Sosa baseball card worth?

What disease does Sammy Sosa have?

The former right fielder has no major health issues that are known to the public. However, he does appear significantly lighter than in his MLB days, which left many fans worried that he might have vitiligo. He denied such rumors and said he wears a bleaching cream every night that whitens him.

What happened with Sammy Sosa?

The retired MLB player tested positive for using performance-enhancing drugs during his MLB career when his name popped up in the 2003 Steroids Scandal.