This article was last updated by Prince on January 5, 2023

As we look closely, female boxers and their level of boxing are still in a thriving wave. Still, numerous female boxers live up to boxing and have maintained the appearance of a strong lead in the game. Fierce, heavenly, and competitive are all words that can take up their boxing level.

Boxing has been around the sports industry for way too long, and it is one of the most popular sports today. However, it’s not the same with a man’s and a woman’s fields.

Additionally, they have been catching up to the realm of men’s boxing level.

Herewith, we will discuss the top fifteen female boxers in the ring today.

As we discuss the well-known lady fighters and their games, we will dive deeper into their impact on the octagon.

Likewise, the list has been made based on their image and fights; hence, it may create otherwise than your thoughts.

As we present you with the list, you can discuss and rank them in your opinions. Also, if we miss anything, be sure to let us know.

Widely known as the world’s best active female light middleweight, Claressa Shields holds eleven wins in the boxing ring and a win in MMA. Well, among her boxing wins, two of them are by knockout.

As far as her legend is, Claressa is also the only boxer in history, female or male, to hold all four major world titles in boxing.

In the meantime, she also holds two gold medals in the women’s middleweight division.

Shields is the only boxer in history—male or female—to simultaneously hold all four of boxing’s main world championships—the WBA, WBC, IBF, and WBO—in two weight divisions.

With it, Claressa is the only American boxer in both the male and female categories to win two consecutive Olympic medals.

Laila Ali is a current television personality and a retired professional boxer with an amazing undefeated record of 24 fights. She has altogether been titled the greatest female boxer of all time.

For elaboration, she has maintained the WBC, WIBA, IWBF, and IBA female super middleweight titles throughout her career.

Ali is considered regarded as one of the best female boxers of all time by many in the sport. She is Muhammad Ali’s daughter.

Lucia Rijker is a talent that spreads throughout the field as a boxer, kickboxer, and actress. During her journey inside the octagon, she was often stated to be “The Most Dangerous Woman in the World.“

Furthermore, Lucia is considered the greatest female boxer of all time. As for her record, she has maintained a good score of 35 wins and a single draw.

Rijker left boxing in 1999 to seek a career in Hollywood after winning her first 14 fights but failing to get a battle with Christy Martin.

Among her wins, 25 are by knockout.

Follow the link to learn about the top UFC fights of all time.

When we talk about the greatest female boxers, we can’t keep out Katie Taylor. She is the one who starred as the world champion just within five professional fights.

Also, among the eight fighters (both male and female) in history to hold all four major world titles in boxing, she is the one.

Additionally, Katie is one of the contributing factors in the female boxing arena. Currently, she stands as the world’s best active female lightweight.

Glancing at her boxing record, Katie maintains 18 wins, and 6 of them are via knockout.

Taylor made her professional boxing debut in 2016 with Matchroom Boxing. As of September 2022, BoxRec and

The Ring both rank Taylor as the greatest active female pound-for-pound in the world in the lightweight division.

She is renowned for her brisk, combative boxing style.

Recently, According to BoxRec and The Ring, Taylor is the greatest active female pound-for-pound in the world in the lightweight division. She is renowned for her brisk, combative boxing style.

Today, Amanda Serrano is the world’s best active female featherweight with forty wins inside the octagon. Among them, 30 wins are via knockout, and she also has a draw and a loss.

At present, she holds the titles of unified featherweight world champion, WBO, WBC, and IBO.

Not to mention, Amanda is the Guinness World record holder for the most boxing world championships won in different weight classes by a female.

Herewith, she is the only female fighter and Puerto Rican to achieve that feat. Indeed, the master of surpassing records!

Recently, She is recognized as the best active female featherweight in the world by The Ring and BoxRec, and the third best female overall by ESPN and The Ring.

Serrano received the WBO’s Female Boxer of the Year Award twice (in 2016 and 2018), and she also received the first-ever “Super World Championship” for a female boxer.

Elegant as a dove, yet fierce as a lion. That’s how Cecilia is! Well, she is widely popularized as the first-ever boxer to hold five world titles.

Also, she is the figure who dominated the welterweight division from 2014 to 2020 as an undisputed fighter.

Also, she is one of the only nine boxers in boxing history to hold all four major world titles. In the meantime, she is the first boxer ever to bag five world titles.

On May 5, 2018, HBO aired its inaugural women’s fight, which Braekhus won against Kali Reis.

Ann Wolfe is a boxer, trainer, and coach and one of the greatest female boxers of all time. Today, she stands with 24 victories that include 16 knockouts.

Well, she holds three world titles in the weight category. Alongside this fact, Ann is also the hand behind numerous professional boxers.

As an extra fun fact, Ann is also the supporting role of the Amazon Artemis in the 2017 film “Wonder Woman.”

Wolfe has trained numerous amateur and professional boxers, including James Kirkland, a light-middleweight, and Jennifer Fenn, her eldest child.

The current and the only boxer to hold both UFC and world boxing titles at once, Holly Holm isn’t someone to mess up with.

What’s astonishing is the title that she holds onto eighteen times. She is a three-in-one package girl that flexes her abilities around mixed martial arts, kickboxing, and the boxing arena.

Likewise, she depicts 14 wins, a loss, and seven draws in kickboxing. Lastly, she portrays 14 wins and five losses in MMA.

When we talk about female boxers, no one can obviously miss out on Christy Martin. For most of her career journey, she was titled “the most successful and prominent female boxer in the United States.”

Currently, she is the CEO of Christy Martin Promotions. As a boxer, Martin has portrayed numerous serious fights and tactics.

Not to mention, she is the first female boxer inducted into the Nevada Boxing Hall of Fame.

Throughout her career, Martin worked other normal jobs besides boxing. Today, she stands with the stats of 49 wins, 7 losses, and 3 draws.

Currently, Regina Halmich is the major factor in popularising female boxing in Europe.

Additionally, she has implanted a deep root among American fans as they consider her the second-best female boxer of all time.

As she ended her professional career back in 2007, Regina stood with 54 wins, including 16 victories by KO. Well, she has a single loss and a single draw.

Giselle Salandy was an undefeated female boxer in the ring who unfortunately left the mortal realm too early. 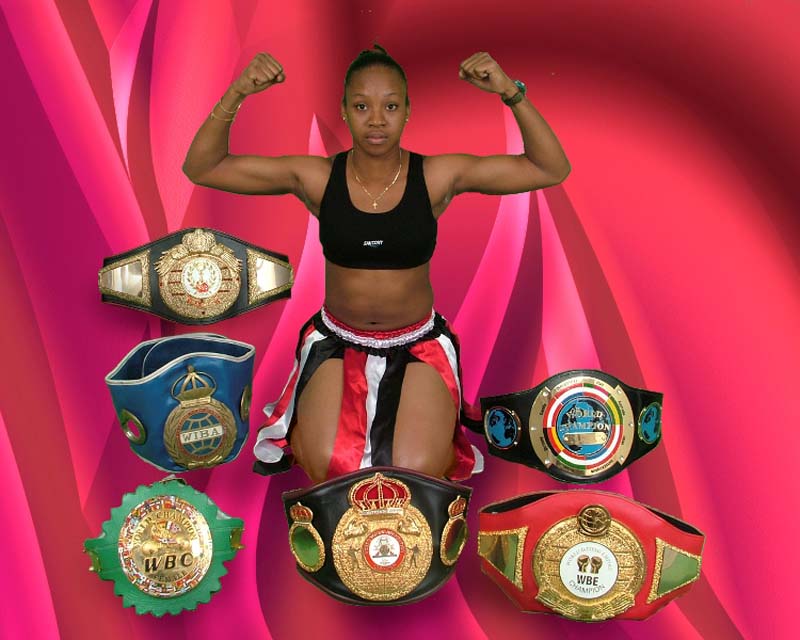 She first won the title when she was fourteen.

As for her boxing journey, she commenced early as a professional at thirteen, which ended when she got 21 years old.

For almost all of Natascha Ragosina’s career, she spent as the top female super middleweight in the world. Well, the title fits her perfectly, though.

As a boxer, she maintained an undefeated streak of 22 victories, among which she has 13 by knockouts.

When it comes to the greatest female fighters of all, you simply can’t leave Ronda out! Ronda Rousey, nicknamed “Rowdy,” is widely known as the “Queen of the UFC World.”

Initially, she commenced her journey as the foremost American woman to earn an Olympic medal in judo. Ronda is a talented mixed martial artist, judoka, and WWE wrestler.

Well, magazines have titled her “one of the defining athletes of the 21st century.”

Mary Kom, the only female to win the World Amateur Boxing Championship six times, is the one to write history in women’s boxing.

Widely popularized as the “Magnificient Mary,” she is the only boxer (male or female) to win eight World Championship medals.

Also, without even stepping into the professional arena, Mary surpassed numerous boxers with her games.

Not to mention, her accomplishments and awards have left her on the same level as numerous highlighted fighters.

In terms of revenue, endorsements, and accolades, Kom became the first amateur in India in 2015 to outperform a number of professional athletes.

She is also the lightweight champion of the IBA and IFBA. She is a taekwondo champion as well as a model and businesswoman.

Unlike others, Mia St. John commenced quite late on the boxing field at the age of 55 Years Old.

Apart from being a boxer, she initially was a taekwondo champion. To date, she has been the champion of WBC, IBA, and IFBA.

During her career, Mia gained herself a nickname as “The Knockout.” Often, she was also named “Queen of the Four-Rounders.”

Overall, she stands with 49 wins in her boxing career that includes 19 knockouts. Mia has 14 losses, and two draws to date.

Read more on top UFC fighters of all time.

9 Best Electronic Dart Board For This...