The Career Journey of Seth Williams, A Rising Star!

Life is all about ups and downs, and so is the NFL. Talking about this phase, Seth Williams is right on the spot with his games, through the transition in his Auburn’s leading performance to the tenure at rookie minicamp.

Young, talented, and fresh on the games, Seth Williams stands with the Denver Broncos as the wide receiver. Apart from his football interest on the field, Seth also showed his peak interest in basketball during his college days. 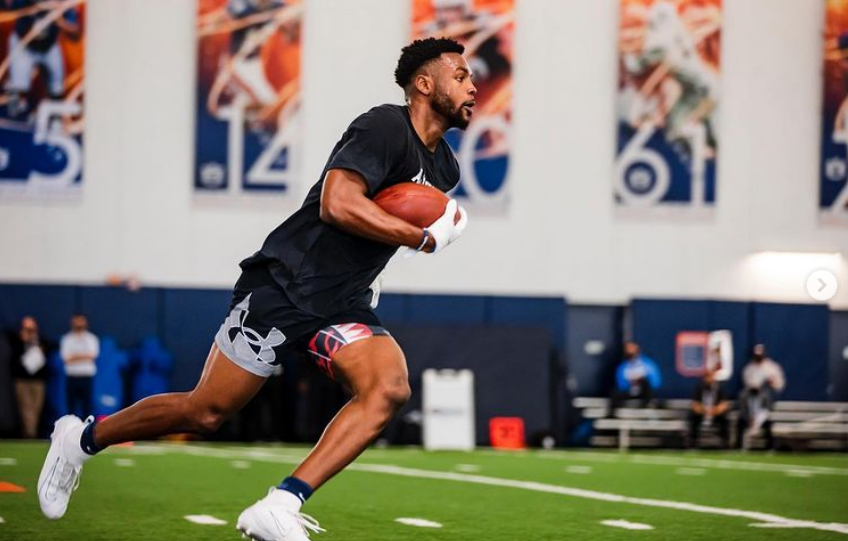 Today, we will venture into all the details regarding Seth Williams’ career and life journey. However, before we jump to it, let us first get through a quick dose of general facts.

As for his physical appearance, Seth depicts a chocolate-colored skin tone with deep dark black hair. Likewise, he has a maintained beard and eyes of similar color.

Seth Williams was born on April 10, 2000, under the star sign of Aries. He is one of the two children of Tonya Williams and Robert Williams. he was born and grew up in Tuscaloosa, Alabama, United States. Additionally, he has a sister named Shanquela Williams.

Talking about his parents, Seth’s father, Robert, is a city and school bus, driver. Likewise, his mother, Tonya, works in the adult disability field. Seth grew up in a loving household, and his parents ensured he and his sister had everything needed.

As for Seth’s educational background, he accomplished his early education at Paul W. Bryant High School in Tuscaloosa, Alabama. Following his high school studies, his hometown college offered him to study at the University of Alabama.

However, his itch for independence drove him three hours across the state to study and play for Auburn University. At Auburn,

“Yeah, just trying to get away from all that I had seen. Because my house was not too far from the campus, I wanted new scenery and to try something different.”
– Seth Williams

Williams has been on the field since his early days of middle school and then moved to the high school for spring practices. After his impressive high school years, Seth got numerous scholarship offers from universities.

Some of his offers include from Alabama, Auburn, Ole Miss, Georgia, and Florida State. Altogether, Williams later devoted himself to Auburn University. Besides being the wide receiver, he stood out as a ball-hawking safety and an impressive specialist.

Besides football, Williams has played tracks and even baseball. Baseball kept him in the sports industry, and he has been in it since he was eight. From raw prospect to an experienced athlete, Seth had improved vastly by the end of his collegiate years.

Seth Williams joined the professional field through the 2021 NFL Draft, where the Denver Broncos drafted him 219th overall in the sixth round. Though he signed an official contract in May 2021, the Broncos waived him just three months later in August.

Following it, they again signed Seth to the practice squad the very next day. However, Seth’s NFL debut only came in January 2022 against the Los Angeles Chargers.

At present, the exact details regarding Williams’ net worth are unknown. However, as per the sources, he maintains an annual average salary of $705,000 while his contract is valued at $2,425,000.

At present, Williams is not in any relationship or dating anyone at the moment. Likewise, there are no rumors regarding his dates and past relationships.

He is on Instagram as Seth Williams (@sethwill_8) with 26.3k followers. Likewise, he is on Twitter as @8_sethwilliams with 9.2k followers.

J.J. Watt embodies the ideal gentleman. Since his first draft, the top NFL player of 2015 has played for the Houston Texans. Here’s everythinHere’sneed to know about him>>

Which jersey number does Seth Williams wear? What’s his careeWhat’sistic?

Seth wears jersey number 19 for the Denver Broncos. To date, he has only played a total of two professional games.

Jean-Claude Killy Net Worth | Earnings and...