This article was last updated by Sanjib Sah on June 23, 2022

What are the weirdest sports you have heard of?

Keep reading this article because we have compiled a list of some of the weirdest sports in the world. Some are just so outright ridiculous that you would think it is something entirely made up.

We are used to watching common sports like soccer, basketball, cricket, etc. But across the globe, many sports are unique to the country only. 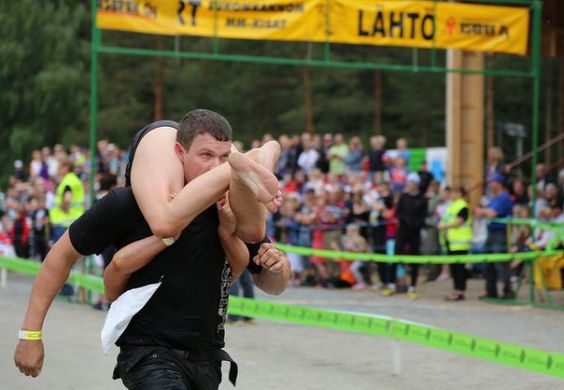 While the outsiders of the country will find the sports strange or outright weird, many of the sports we are mentioning today are old and traditional ones. However, the list also includes weird modern-day sports.

But the weirdness is also a good thing as it garners more interest from people. It adds to the fun element of the sport.

Without dilly-dally, let us look at some of the top weirdest sports from around the globe.

We have come up with the list with the help of internet sources like Sportingnews, Goliath, etc. But before the details, let us take a peek at the list beforehand.

The first sport we are talking about is Malaysia’s national sport. Sepak Takraw is a mixture of volleyball and football played between two teams of two to four-player.

The sport consists of two words, Sepak in Malay for kick and Takraw in Thai for muzzle or woven rattan ball. It translates to “to kick a rattan ball.”

The game takes place on a court resembling a badminton court. The players can use their feet, knees, shoulders, chest, and head to touch the ball. A rattan which is a synthetic plastic ball is used in the game.

The sport’s last name was “Sepak Raga Jaring.” The game was first exhibited in 1945 in Penang. However, the game’s modern version was introduced and standardized in 1960.

Malaysia, Singapore, Thailand, and Myanmar collectively came together to standardize the sport. After that, the sport was also introduced in the 1965 Southeast Asian Games. Likewise, the game has also been part of the Asian Games since 1990.

In 1988, International Sepaktakraw Federation (ISTAF) was formed to govern the sports and is responsible for major international tournaments.

Our number 9 of the top weirdest sports goes to Kabaddi. Well, compared to many other games on our list, it might not look weird to you. But the game is still a bizarre one.

Kabaddi is a national sport of Bangladesh, but the game’s origins date back to Tamil Nadu of Ancient India. Two squads of seven players play the game.

The rules of the game are what make the game bizarre. It has two primary forms: Punjabi Kabaddi, a more traditional one, and the standard style, the modern version.

Let us explain the games in simple terms. The playground has two sides. Then the players have to run into their opposition half, tag an opponent, and leg it back to their half without getting caught.

If the player is caught or tackled before making it into their half, they must leave the field. But with each point scored by their team, they can be brought back.

The game became popular in the 20th century as a competitive sport. Similarly, the game is also one of the sports in the Asian Games.

Now we are getting into the weird part. On our number 8 of the top weirdest sports, we have Tuk Tuk Polo. Tuk Tuk is popular means of sports in many parts of Asia. They incorporated it with Polo and hence the game Tuk Tuk Polo.

The game is a newer one and came to life in 2016. The sport began as a replacement for a form of polo sport. The former version of Polo was played on elephant backs.

The game takes place on a field suitable enough to ply a vehicle. There are two teams, and each group has players riding two Tuk Tuk, and there are goalposts on both ends of the field.

The main objective of the game is similar to that of Polo. The players try to score as many goals as possible at their opponent’s goalpost.

Although the game is popular in Sri Lanka, who knows, the sport might soon become famous all around the globe.

Our next weirdest sport comes from New Zealand. Zorbing also has many names like globe-riding, sphering, and orbing. In recent times, the sport has become more popular.

By looking at the sport, you can fathom why the sport is popular. More than the competitive element, the sport has the feature of recreation and fun.

A player gets inside an orb of transparent plastic. Then the orb is pushed down on a gentle slope. The orbs can either have a harness or be without a harness.

The game primarily takes place on a hillside. However, it also is played on a level surface. Sometimes, there can be the construction of wooden or metal ramps in the absence of a slope.

Similarly, water Zorbing has become popular over the years. Once the player gets inside, the orb is appropriately inflated and sealed in water Zorbing.

The first Zorbing site was in Rotorua, New Zealand. The sport has earned popularity across the globe. A popular form of Zorbing known as “Water walking” has become popular in many countries.

You might have heard about chess and boxing as separate sports. But on our number 6 of the top weirdest sports, we have the hybrid of both the sports called Chess Boxing.

You might be surprised to know that the earliest version of combining chess and boxing occurred in the late 1970s.

The event took place in a boxing club outside London. Then Dutch performance artist Lepe Rubingh put together the first event.

The first competition, however, took place in 2003 in Berlin. Two competitors play 11  alternating rounds of six blitz chess and five boxing the game.

The competitors can win the game by knockout, technical knockout, checkmate, or exceeding the time limit in the chess round.

World Chessboxing Association and World Chess Boxing Organization governs the sport. The sport that started in London is now famous in other countries like Finland, Russia, and India.

This next game is for the ones who love ironing. The sport is called Extreme Ironing and is on our number 5 of the top weirdest sports. In this sport, people have taken ironing to the extreme.

There’s a dispute over the origin story of the sport. Some believe Tony Hiam invented the sport in 1980, inspired by his eccentric brother-in-law, who ironed while camping.

Meanwhile, some believe Phil Shaw started the sport in 1997. The sport has become popular, and people are taking it to any extreme.

Some people take ironing boards to remote locations, while some iron while skydiving. Similarly, the sport has taken place in a canoe, on the mountainside, on top of a giant bronze statue, underwater, you name it.

The Extreme Ironing Bureau even states that the sport is one of the latest dangerous sports that combines the thrills of extreme outdoor action with the satisfaction of a well-pressed shirt.

On our number 4 of the top weirdest sports, we have Bossaball. The game’s origin traces back to Spain; however, Filip Eyckmans of Belgium conceptualized it in 2005.

Two teams participate, and the game combines volleyball, football, and gymnastics with music. The game takes place on an inflatable court with two trampolines on either side of the net.

Only the attacker occupies the trampoline. A player on the opposing side served the ball while the opposing team must return the ball over the net until the ball lands in a scoring zone.

The thing to note is that no more than five touches are allowed. The trampoline assists the player to jump high enough to spike the ball over the net and score direct points.

The sport looks like a lot of fun. Moreover, it is played beachside on an inflated court trampoline. What more can one ask for ultimate pleasure?

Okay, now you might have heard about this sport called Wife Carrying. It is one of the weirdest and most fun sports in the world. The sports competition is held every year in Finland.

The sport’s origin story has many versions, but the game originated as Eukonakanto in Finland. The male competitors race while each carries their female teammate on their back in the competition.

The competitor has to go through various obstacles and reach the finish line. Initially, the course of the race used to be rough, rocky terrain with fences. The course has changed with time.

Similarly, there is also various practice of carrying during the race. There is classic piggyback, over the shoulder (fireman’s carry) or Estonian-style (upside down).

Since 1992, Finland has held the Wife Carrying World Championships annually. What’s in the prize, you may ask? It is the wife’s weight in beer!

Our number 2 of the top weirdest sports goes to Buzkashi. The sport is a traditional Central Asian game mainly played in Afghanistan. The name Buzkashi is a Pashton or Persian for goat dragging.

The sport is old and dates back to China and Mongolia between the 10th and 15th centuries. Now, the game is more of a remnant of the ancient era.

Although the sport is mainly played in Central Asia, it has made its way to Western countries like Turkey and even the United States. 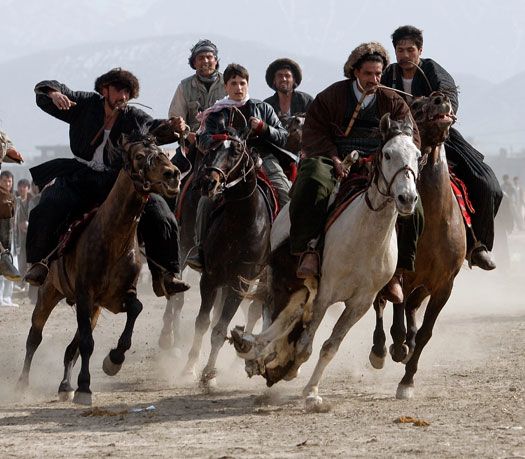 The sport is not exactly what you call friends. Players mount on horses intending to try to pick up the goat carcass. The game can last for several days, and the winners get various prizes.

During the game, the sport can get very physical. The riders can knock off their fellow competitors, and accidents are not uncommon in the sport.

The rules of the game vary from country to country. Buzkashi is one of the weirdest sports in the world.

When it comes to sports, nothing ceases to stun us more. But have you ever wondered what can be the top extreme sport? Click here to find out!

And our number 1 top weirdest sports title goes to Cheese Rolling. It is one of the weirdest sports held in Glouchester, England. The first written evidence of cheese rolling dates back to 1826.

While the origin stories have many different versions, the sports event was traditionally held in the local village of Brockworth.

Double Gloucester cheese is rolled down, and then participants race down the 200-yard long hill after the cheese. Whoever makes it to the finish line at the bottom wins. 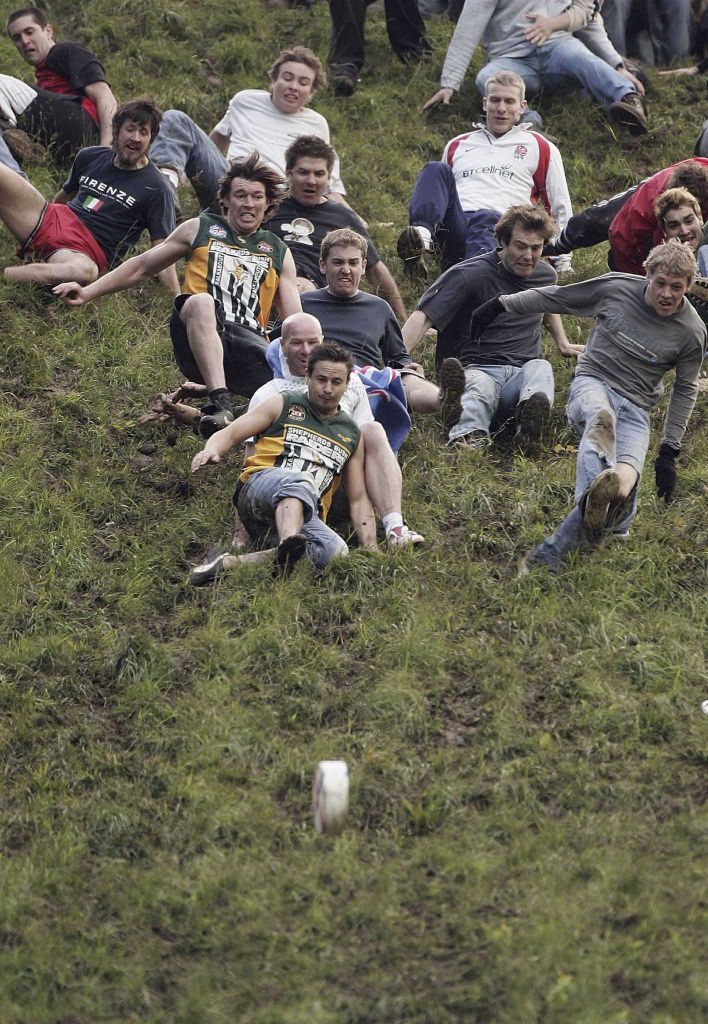 The sport might sound fun, but many participants get injuries during the event every year. The hill is very steep and uneven. Hence, some participants could tumble down, injuring themselves.

For the onlookers, the sport provides a lot of entertainment. The Guardian has also called the event a “world-famous event.” Furthermore, because of the sport’s popularity, there are many participants from across the globe.

Winners from various countries like Canada, Australia, New Zealand, and Nepal have been winners. England might have invented many sports like soccer, cricket, etc., but Cheese Rolling is one of the weirdest sports they ever came up with.

All across the globe, every country has its traditional sports. While it might look strange and weird to us outsiders, it is part of their heritage and tradition for the country and its people.

They might be weird, but it is also why they are more attractive. So, which sport did you find the weirdest one?

Top 10 Professional Sports Players Who Are...