The Tennis world has seen many great female tennis players throughout its history. Many female players have also played an essential role in revolutionizing the sport for the future generation.

Similarly, we have seen many great tennis players who have stood out for their outstanding performance on the Court. It is a tough job to rank the greatest female tennis players.

We have compiled a list of twelve great female tennis players to answer this query.

Our compilation is not only based on which player has the most Grand Slam wins. We are looking at the most tennis Grand Slams women’s division and other title wins to help us rank these female tennis players.

So without further delay, let us look at some of these great female tennis players!

We have prepared our list with the help of references from trusted sources like HowTheyPlay and DadRacket. But first, let us look at the list’s overall ranking in the table below.

We are starting our list of the greatest female tennis player and most tennis Grand Slams women’s division winners with Helen Wills Moody. She was born on October 6, 1905, and is the second most Wimbledon title winner.

She was born Helen Newington Wills and later known as Helen Wills Moody after marriage. Moody first became interested in the sport after watching exhibition matches by famous Californian players.

In 1919, she joined the Berkeley Tennis Club as a junior member and entered her first tournament at age 13 at the California State Championships. Moody won her first singles title at the Pacific Coast Championships in 1922. 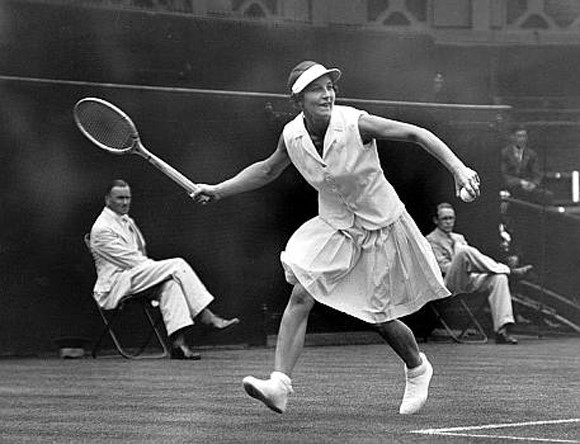 Moody was not only one of the greatest female tennis players but also the first American athlete to become a global celebrity. She is famously known for her signature attire and white visor.

In her career, Moody won 31 Grand Slam titles. In 1935, she was inducted into the International Tennis Hall of Fame. This iconic, dominant tennis player of the 20th century sadly passed away at 92 on January 1, 1998.

On number 11, we have the former professional tennis player Martina Hingis. She is a 42 years-old player who was the first Swiss tennis player to win a Grand Slam and attain a No.1 ranking.

Hingis was born in Czechoslovakia, and both her parents were tennis players. Therefore, she played the sport early and entered her first tournament at age four.

At age 12, she became the youngest player to win a Grand Slam junior title: the girls’ singles at the 1993 French Open. Hingis made her WTA debut in 1994 at the Zurich Open. 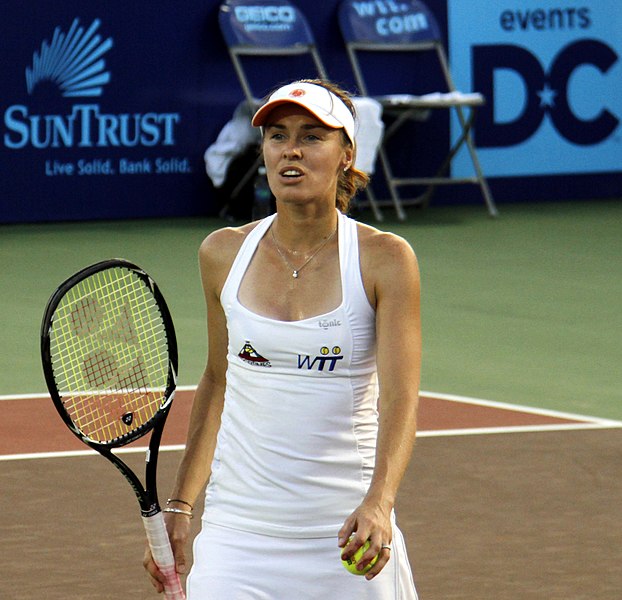 Then in 1996, Hingis became the youngest Grand Slam champion at Wimbledon at age 15.
During the 1990s, she set a series of “youngest-ever” records.

Hingis is undoubtedly one of the greatest female tennis players of all time. In the 2011 June edition, Time named her as one of the “30 Legends of Women’s Tennis: Past, Present, and Future.”

34 years-old Justine Henin is a former professional tennis player. She contributed to helping Belgium to be established as a leading force in women’s tennis.

Henin started playing tennis at the local tennis club following her mother’s death. Her coach Carlos Rodrigues further guided her career. Her early career win was in 1997 when she won the junior girls’ singles title at the French Open.

In 1999, Henin started her professional career on the Women’s Tennis Association tour. By 2001, she had established herself as a significant competitor. She became well known for her all-court style and mental toughness.

During her playing career, Henin won 43 WTA singles titles. She has won seven Grand Slam singles and a gold medal in the women’s singles at the 2004 Olympic Games.

Henin is considered one of the greatest female tennis players of all time. She was the first Belgian player to be inducted into the International Tennis Hall of Fame in 2016.

Evonne Goolagong Cawley is number 9 of our greatest female tennis players and the most tennis Grand Slams women’s division. Now 71 years old, she was a former World No.1 tennis player.

From her childhood, Cawley played tennis. She later moved to Sydney to pursue tennis after Vic Edwards, the proprietor of a tennis school in Sydney, was impressed by her talent.

In the 1970s and early 1990s, Cawley was the world’s leading player. Furthermore, she became the first mother to win Wimbledon in 66 years in 1980. She won 14 Grand Slam tournament titles, seven in singles, six in dollars, and one in mixed doubles. 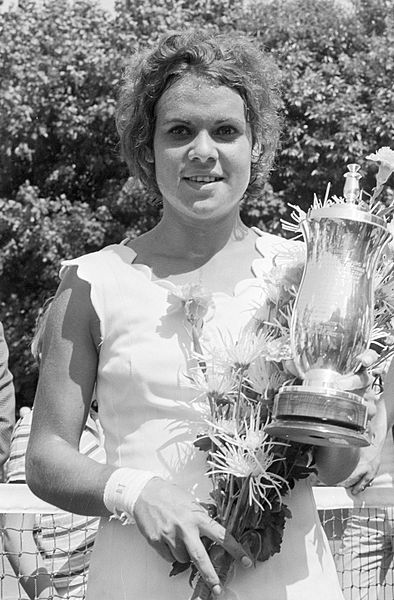 Similarly, Cawley represented her country in three Fed Cup competitions. She won the titles in 971, 1973, and 1974 and was the Fed Cup captain for three consecutive years.

Cawley was named Australian of the Year for her contribution to Australian tennis in 1971.

The 42 years-old Williams is a former world No. 1 player in both singles and doubles. Moreover, she was the first African American woman to reach in 2002 Open Era’s No.1 ranking in singles.

Williams is widely regarded as one of the all-time greatest tennis players. She is the first female tennis player to win five Wimbledon titles. Similarly, she also has seven Grand Slam singles titles.

Her other notable achievements include the record for the longest time between first and most recent grand slam singles final appearances. She is also the first tennis player to win Olympic games in singles, doubles, and mixed events.

Likewise, Williams is a four-time Olympic gold medalist. Since her debut into the tennis world, she has reached the Grand Slams finale 16 times. So when it comes to great female tennis players, Venus William makes a list.

Billie Jean King is one of the most incredible women’s tennis players. Now 79 years old, she has won 39 major titles during her professional playing career.

King is a former world No.1 tennis player who started playing tennis at age 11. She also played softball, but later, in 1964, she left her school to focus on tennis.

After focusing solely on tennis, her career breakthrough came in 1972. King won the French Open in 1972, making her the fifth woman in tennis history to win the singles titles at all four Grand Slam events.

King has been awarded numerous awards as one of the recognizable female tennis players. Likewise, she was inducted into the International Tennis Hall of Fame in 1987.

On number 6 of our greatest female tennis players and the most tennis Grand Slams women’s division winner, we have Monica Seles. She is a former professional tennis player representing her country and the United States.

Now 49 years old, Seles began playing tennis at age 5. Her father helped her develop her two-hand style for both the forehand and backhand. At age 11, she won the Junior Orange Bowl tournament in 1985.

In 1990, she became the youngest player to win the French Open Championship at age 16.

Seles had won eight Grand Slam singles titles before she was 20. However, she became a victim of an on-court attack.

Seles was stabbed by a man on her back with a 9-inch-long knife. After the incident, she did not play tennis for two years before rejoining the tour in 1995. She officially retired in 2008.

In 2009, Seles was inducted into the International Tennis Hall of Fame.

Chris Evert is a former World No.1 tennis player. Born on December 21, 1954, Evert has reached 34 Grand Slam singles finals, the most by any tennis player in the history of tennis.

Her father was a professional tennis coach. Thus, she began playing the sport early, influenced by her father. By 1969, Evert was the No.1 player in the under-14 division in the United States.

Evert holds the record for the most consecutive years of winning at least one major title. Additionally, she has won a record seven titles at the French Open. She is a Hall of Famer and served as WTA’s president after retirement.

On number 4 of the greatest female tennis player and the most tennis Grand Slams women’s division winner, we have former tennis player Margaret Court.

The Court is a former World No.1 and is considered one of the greatest tennis players. Now 80 years old, she was the first woman during the Open Era to win the singles Grand Slam in 1970.

She began playing tennis when she was eight years old. Court won the first seven consecutive singles titles at the Australian Championship in 1960 at age 18.

Widely considered one of the greatest tennis players of all time, we have Martina Navratilova at number 3. The former tennis player was born in Czechoslovakia, and she later turned into an American national.

Navratilova is the number one tennis player with the most Wimbledon titles, i.e., 9. She started her tennis journey at age seven, and by the time she was 15, she was the Czechoslovakia national tennis champion.

At age 18, the payer was stripped of her Czechoslovakia citizenship. Then she asked for political asylum in the USA, and later, in 1981, she was granted U.S. citizenship.

Navratilova is the only tennis player to hold the top position for over 200 weeks in both singles and doubles. After her retirement, she became a coach. She was inducted into the National Gay and Lesbian Sports Hall of Fame in 2013.

Number 2 of the greatest female tennis player and most tennis Grand Slams women’s division winners we have Steffi Graf. Now 53 years old, she is a former professional player who ranked World No.1 for a record 377 weeks.

Her father was an aspiring tennis coach. Therefore, at an early age, Graf was influenced by her father to play tennis. She already had made an impressive junior career before making her senior debut.

Although Graf made her professional debut in 1982, her real career Gram Slam breakthrough was in 1987. Afterward, she went ahead to win six tournaments and headed to French Open.

She won 107 singles titles during her professional career, ranking third on the WTA’s all-time list. Likewise, Graf has won 22 single significant titles, the second-most since the start of the Open Era in 1968.

A versatile player, Graf retired from the sport at age 30. She is regarded as one of the greatest tennis players of the 20th century. In 2004, she was inducted into the Tennis Hall of Fame.

The world has become more aware and accepting of LGBTQ rights and the community’s issues. Here are the top 5 tennis players you didn’t know were homosexual!

Our number 1 greatest female tennis player and most tennis Grand Slams women’s division winner is non-other than the famous Serena Williams. The 41 years-old is one of the greatest and world’s highest-paid women athletes.

Serena Williams is the younger sister of Venus Williams. She made her professional debut at 14, before which she attended a tennis academy. After her debut, she won her first singles at the 1998 Open Gaz de France.

Among the other active players, Williams is the only player who has the most significant titles in singles, doubles, and mixed doubles combined. Additionally, she is the only American player to win more than 20 major titles.

From 2002 to 2017, Williams ranked as the singles World No.1 eight times. Similarly, she has the most Grand Slam singles titles, which are 23. It is the most titles won by any player in the Open Era.

Williams is not only one of the greatest tennis players but is also one of the most famous American athletes. Because of her on-court performance and off-court personality, she is frequently seen on various magazines’ front pages.

Winning the most Grand Slam titles is the primary way to rank the players; however, it is not the single factor that determines the players’ statistics.

These female tennis players are some of the best and the greatest in the sport’s history. Which player do you think is the most outstanding female of all Time? Do let us know!

9 Best Electronic Dart Board For This...