In an interview, Sam Dekker’s Father once said,” He grew up with basketballs in the crib, and the day he could walk, he was in the gym.”

Hence, we can conclude that his attraction to basketball has been ever since childhood. So, who is Sam Dekker?

Sam Thomas Dekker is an American professional basketball player playing as a small forward for the Bachesehir Koleji of the ING Basketball Super Ligi, Turkey.

This is his second time playing for the Turkish Super League, and he has already made quite a name for himself there.

Not being restricted to the NBA and Turkey only, Sam went on to play for Russian league teams like Lokomotiv Kuban Emiliano Carchia of Sportando.

Along with NBA, Dekker also represented FIBA Americas U18 Championship in 2012. The U.S. won the gold over Brazil in the finals.

How about taking a quick detour about Sam Dekker facts:

In the last two seconds of the finals, Dekker put three points through the hoops declaring it as the winning point for the team.

Not to mention, Wisconsin Gatorade Player of the Year was also on his list.

Dekker joined the University of Wisconsin – Madison in 2013. For the Wisconsin Badgers, Decker started three of the 35 games he played.

Furthermore, he earned various titles in his freshman season (2012-13), including the Big Ten Freshman of the Week two times.

His season-high was against Arkansas and Nebraska when he scored 19 points.

Before starting his sophomore year, Sam was named to the Wooden Award and Naismith Trophy watch lists.

His outstanding playmaking abilities reached off-limits in the NCAA Tournament.

He threw a career-high 23 points with ten rebounds to lead the 1-seed Wisconsin to a 79-72 victory in the sweet 16 against the number four-seeded North Carolina.

The “Dekker Dagger” shot for the Elite 8 against Arizona Wildcats helped the Badgers win in the last seconds. That game gave him a new career-high of 27 points.

He was sometimes called ‘Slam Dekker’, especially after his game-winning shot against North Carolina.

Another memorable game was in the final four games against undefeated Kentucky Wildcats, where Dekker scored 16 points, leading Wisconsin.

The NCAA tournament went well until the finals with Duke, consequently leading Wisconsin to be the runner-up.

A golden opportunity arrived with a great season as the 2015 NBA draft made him forgo the final year eligibility.

Dekker has been doing exceptionally well since he started as a graduate of Wisconsin University in 2015.

On June 15, 2015, the Houston Rockets selected Drekker in the 2015 NBA draft with the 18th overall pick. He played all eight of the Rocket’s preseason games.

After a back injury and surgery, Dekker missed most of the 2015-Summer League matches.

Dekker managed game time in just three of the Rockets’ first 11 regular-season games. He got to join the Rio Grande Valley Viper, the Rockets P-League affiliate receiving two other assignments for February 2016.

Another big shot career point was with Memphis Grizzlies, with 30 points in a 119-95 victory.

After playing, two-season for Houston Rockets, he signed with L.A. Clippers for a season. Then, at Cleveland Cavaliers and afterward in Washington Wizard for a single season.

As of 2019, he signed with Russian club PBC Locomotive Kuban of the VTB United League & Euro Cup for a season.

Then Dekker player joined the Turkish Super League with Turk Telekom in 2020.

Returning to the U.S., he joined Toronto Raptors for two months before being waived in 2021.

Dekker made 21 points in just 22 minutes showing his remarkable zone on his debut night. 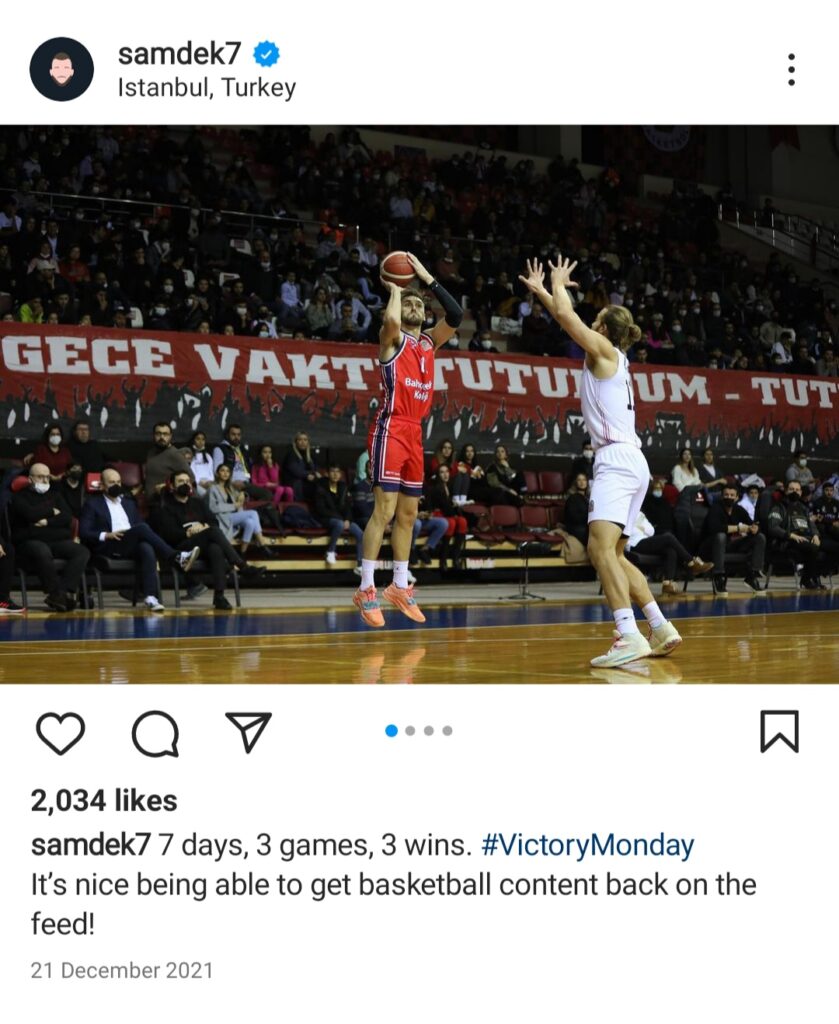 At the end of the month, he stood as the club’s leading scorer- averaging 173 points, 5.3 rebounds, and three assists in 26 minutes per game.

This season, he was the Most Valuable Player(MVP) on February 6, 2022, scoring 22 points, six rebounds, three assists, and three steals for the Koleji.

Dekker is a pure Sheboygan guy. He never left his hometown in his entire professional NBA career.

Dekker was born to his Father, Todd Dekker, and his mother, Carol Dekker. Sam has two siblings, a brother and a sister named John and Hannah.

Moreover, we can see family pictures shared by Hannah on her Instagram @hedekker.

Above all, Todd Dekker was Sam’s high school head coach.

He coached Sam for four years and said,” Not many fathers have this kind of opportunity. I am very grateful to be his mentor for all those years.”

Todd Dekker is very proud of his son’s achievement.

She is the daughter of NBA announcer Kevin Harlan and granddaughter of NFL Green Bay Packers Chairman Executive Bob Harlan. 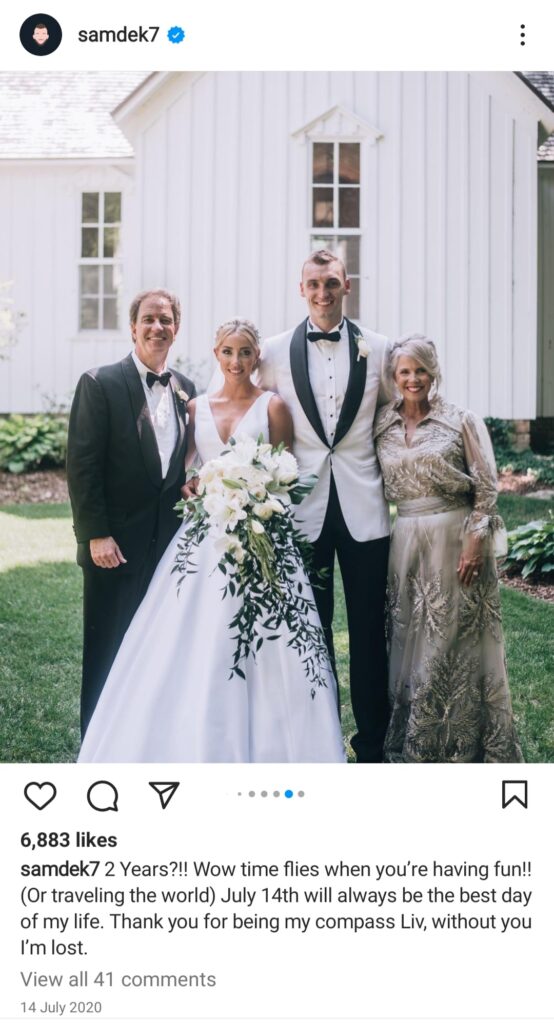 Olivia has worked as a sideline reporter for ESPN since 2015 and covered reports of the World Team Tennis for CBS Sports in 2019.

She grew up in Mission Hills, Kansas, graduating from the University of Georgia in 2014.
Above all, Olivia was Miss Kansas Teen USA 2010.

The athletic-bodied Sam has an incredible height of 203 cm with a wingspan of 212 cm.

He weighs about 219 lbs and has black hair with dazzling brown eyes.

What is Sam Dekker’s current Net Worth?

Sam “The Pickup” Dekker has played for the NBA and league teams in countries like Turkey and Russia.

Chiefly his net worth is acquired from career salary, endorsements, NBA contracts, international teams, and other sales.

The most common thing about any known personality is that they somehow get caught up in controversy one way or another.

Around August of 2018, Dekker sparked a debate among the fans on his Twitter with some controversial statements about white pride and possibly being supported by Donald Trump.

Dekker had tweeted in response to an article ” White People have no culture” to his former Wisconsin teammate Bronson Koenig.”

He further stated, ” Don’t put it in my face that being a white guy is something I’m supposed to be ashamed of,” since -deleted.”

“I’m proud of who I am, and so should you. But you’re Native American and also white, BK. This article speaks of many untruths about most of our “culture” that we supposedly don’t have.”

It was inappropriate and morally unjustifiable, resulting in much backlash and forcing him to delete the tweet.

The “All Things Covered” podcast went viral in October 2020. The Raptors player and Dekker’s ex-teammate said something reprimanding about him.

He hinted that he never got along with Dekker because of his talks regarding “Trump” and being his adherent supporter.

Bringing the former member such backlash by a reputed organization like Toronto Raptors is a low blow.

It was when the organization was said to be trying to be socially conscious but still slipped at their commitment.

Although San’s wife, Olivia Harlan, a sports reporter, defended her husband, saying.” he is neither a racist nor a Trump supporter,” after the broadcast, nothing came out.

It is still something to know and why he said it.

With over 184k followers and 1.4k posts, we can guess he is a very public person sharing beautiful pictures of himself and his wife.

And he surely knows how to melt his Instagram visitor’s hearts by sharing attractive pictures of his green-eyed husky-heeler mixed dog. 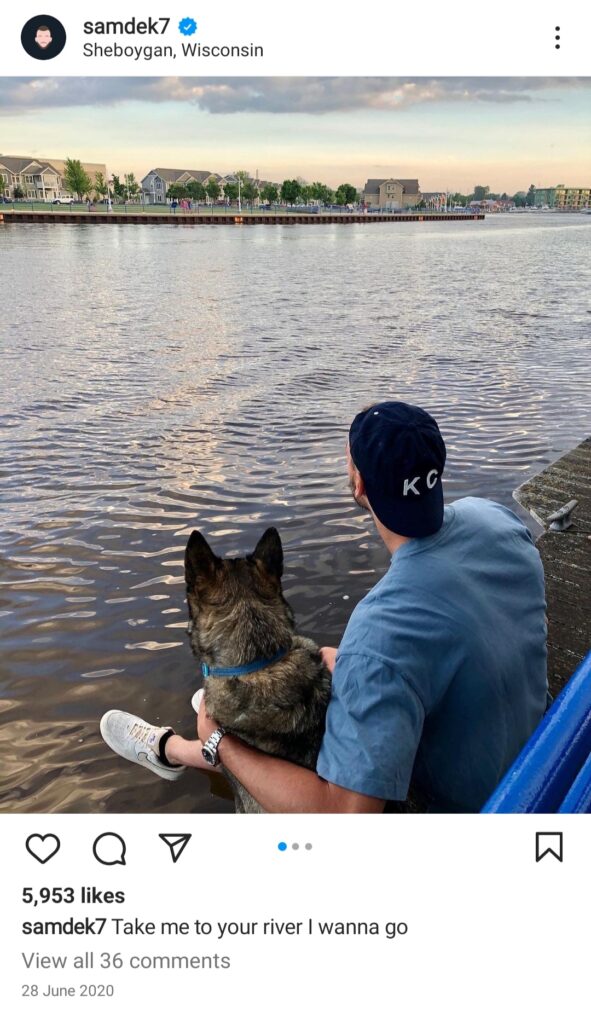 Dekker seems to enjoy his life pretty well in Sheboygan House as a husband and a pro hoops player.

Why did the Raptors waive Sam Dekker?

The raptors waived them before his contract became fully guaranteed.

There is undoubtedly a debate on whether it was necessary because of luxury tax or keeping Sam Dekker or other players who were said to have got what the team needed and swallowing that hit to the Raptor’s financial flexibility.

Was Sam Dekker a UFA?

With the 2021-22 season-ending, he would’ve been an unrestricted free agent, but after being waived, he was ineligible for a two-way contract with any team based on his experience level. So, he went for Bahcesehir Koleji.

Does Sam Dekker have a child?

We know Sam’s wife, Olivia Harlam, is pregnant, as per the post on Instagram in early November. So, her due date may be around late June or early July.