Who is Matt Ryan’s Wife? All about Sarah Marshall

This article was last updated by krishna Gurung on January 9, 2023

Sarah Marshall is equally attached to sports as her husband, Matt Ryan, an American football quarterback for the Indianapolis Colts of the National Football League.

He is also known as the “Matty Ice.” And so is his wife, Sarah Marshall, who has distinguished herself as a fine sportswoman.

Sarah is into three sports. In addition, she is a steadfast supporter of her husband and has always been a part of his achievements and endorsements.

The tall, beautiful lady has consistently displayed her passion for sports with the help of renowned athlete Matt. And it appears to be that Matt is also equally supportive of his wife.

However, let’s learn more about Matt Ryan’s wife, who has an exciting and intriguing personality. But before anything, let’s glance at quick facts about Sarah Marshall.

Who is Matt Ryan?

Matthew Thomas Ryan, born on May 17, 1985, is an American professional football quarterback. He currently plays for the Atlanta Falcons of the National Football League (NFL).

The Falcons picked him with the third overall pick in the 2008 NFL Draft. Moreover, he has played thirteen seasons with the team.

He performed exceptionally well in his debut season and accumulated honors such as the NFL Rookie of the Year.

Matt became the first $30 million per year quarterback after signing a $150 million five-year extension with the Falcons in 2018.

In addition, he was also the highest-paid player in NFL history until being replaced months later by Aaron Rodgers.

Matt holds several team passing and NFL records, including the most passing yards by a quarterback in his first 12 seasons.

Throughout his career, he has marked himself as the most efficient player. In 2015, he named the 77th position on the ‘Top 100 Players of the NFL.’

Apart from football, Ryan is also an avid golfer. Moreover, he has participated in tournaments such as the American Century Golf Classic.

Matt Ryan’s social media is full of his enthralling games, picture, and adorable family. The athlete is quite active on various social media platforms.

You can find him on Instagram as @ryan_matt02. He has amassed 375k followers on Instagram as of September 2021. Besides this, Ryan is also active on Twitter and is often a trendy topic on the handle.

He goes by the username @M_Ryan02 and has accumulated 313.5k followers as of Sep 2021. You can also find Ryan on Facebook, which has 213k followers.

Moreover, when she was just a junior in high school, she earned Maine’s Female Athlete of the Year.

Sarah attended Boston College, where she majored in Communications along with her active enrollment in sports.

She became a starting player on the basketball team for three years in college. 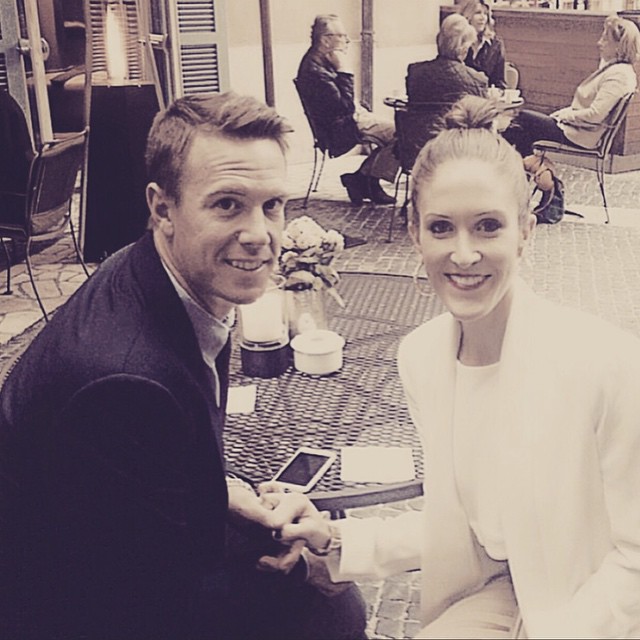 She played point guard at Boston College, and she was the prototypical point guard. She got everyone where they needed to be, assisted, set people up, and was a playmaker.

Sarah always tried to involve her teammates. Besides basketball, she was also involved in soccer and track. However, she hadn’t run away for a long time now.

Now Sarah works for the Atlanta Dream (WNBA). She is an official sponsorship sales consultant.

How did Matt Ryan and Sarah Marshall meet?

Matt Ryan met his wife Sarah while attending Boston College in their first year. They both graduated in 2007.

She was very active in sports, which became an advantage because their shared love for athletes brought them together.

In an interview, Sarah revealed that the couple first met when they ran into the weight room as all the athletes and team worked out in the same building.

They frequently bumped into the weight room and eventually became friends. However, they mostly hung out with a group of friends since they had mutual friends.

Sarah also said that in no time, their friendship bloomed into a romantic relationship.

She recalled that she and her three girl teammates were going to see a movie one day, and she invited Matt along to see Man on Fire.

Sarah Marshall was born in 1985 in Portland, Maine, and she celebrates her birthday on July 23 every year. She is currently 37 years old.

Sarah’s parents are John Marshall and Susan Marshall, and she lives in Atlanta, Georgia. She was raised with three sisters, Abby, Anna, and Maggie.

She completed her high school at Catherine McAuley, Falmouth, Maine. During her school life, she was marked by her extraordinary sports skills as she actively engaged in several sports activities.

She was a three-sport player at her high school, where she played basketball, soccer, and track.

It helped her to pursue her athletics field in her college years. Later, she joined Boston College and enrolled in study and sports.

Similarly, she met her partner, Matt Ryan, during her academic years at Boston College.

Like her husband Matt, Sarah also shares a unique interest in sports, although their spring activity differs. She has always been an avid sports enthusiast since her school days.

Moreover, Sarah was a three-sport athlete. She played soccer and basketball and ran track.

In addition, she was named the school’s all-time leading scorer and honored MVP twice in her high school basketball career.

She didn’t want to limit herself to sports, so she also decided to perpetuate her interest in sports in college. Sarah started as a point guard for three seasons with the basketball team at Boston College.

She was a dynamic athlete and earned second in Eagle’s history for assists. But unfortunately, her connection with the Eagles ended after she graduated in 2007.

Due to her elite experience in college, she was recruited as the Sponsorship Sales Consultant for the WNBA’s Atlanta Dream.

Before the position, Sarah had worked in administrative roles in different companies in New York and Atlanta.

Matt proposed to Sarah after a few years of dating in 2010; his other half said yes. So finally, the couple tied the knot on April 8, 2011.

However, they didn’t rush to welcome a child and instead focused on their respective career. Undoubtedly, the couple is profoundly in love with each other.

On November 19, 2016, Matt melted lots of heart during his jersey retirement speech appraising his wife that the best thing that happened in his college life was meeting his significant other, Sarah.

Marshall is a huge proponent of her husband in his career. She explained that when Matt was drafted to join the Falcons, she unquestionably switched her allegiance to his new team from that team, the Patriots she supported.

After six years of marriage, Sarah and Matt finally announced they were expecting a child in November 2017.

Unfortunately, Sarah experienced complications and was put on bed rest in January. Moreover, she revealed to Times Magazine that it had been a long and overwhelming journey for her, but in the end, it was worth it.

The couple couldn’t be happier to welcome them home. And she also said that it was a dream come true to have children in a home.

They were thankful to their doctors and nurses in the NICU, who flawlessly helped them deliver healthy children through the complicated pregnancy.

She added that they gave them excellent care and will forever hold a special place in their hearts.

In addition, the couple was grateful to their family and friends, who they couldn’t have gotten through this journey without.

The twins are growing, and we hope they will follow in their parent’s footsteps of hard work and success.

When “Forgetting Sarah Marshall” was released in 2008, Sarah’s experience with the movie was hilarious. She shares the same name as the film.

The film’s marketing Campaign featured billboards like “You suck Sarah Marshall” and “My mom hates you, Sarah Marshall,” so she had some fun moments with those signs.

Every chance she got, Sarah took a picture under a sign that said, ‘You suck, Sarah Marshall.’

According to her, even today, when people find out about her name Sarah Marshall, they think it’s cool.

The pair’s siblings are married to each other

Matty Ice’s brother Mike is married to Sarah’s sister Maggie. In addition, they both have three children together.

Maggie previously interviewed the Press Herald and mentioned why Sarah and Matt are perfect for each other.

She said, “They’re a perfect complement for each other. Matt is so lucky to be with Sarah because she understands the whole life of an athlete.” She also added, “She is right in sync with Matt.”

Unfortunately, there is no information regarding Sarah Ryan’s net worth as a sponsorship sales consultant at Atlanta Dream (WNBA).

However, she shares the massive net worth of her husband, Matt, an American football quarterback. Matt has a net worth of $70 million and a salary of $30 million.

He has a five-year contract with Brighton. Moreover, the contract is worth £9,100,000. Apart from the wealth accumulated from his professional career, he is also engaged in various endorsements and sponsorships.

Matt has endorsed and appeared in brands like Nike, Comcast, and Liquid Nutrition. So we can say that Matt lives lavishly with his family.

Sarah Ryan is pretty active on various social media platforms. Her social media profile is quite attractive and has lured huge followers.

She constantly posts pictures of her adorable twins and husband. The images are so heartwarming that they can leave everyone in awe. However, you can find her on Instagram by the username @sryan03.

Sarah Ryan is widely known as the beautiful wife of athlete Matt Ryan. But besides that, very few people know about her. Yet, she has her own identity that is worth knowing about.

So we will discuss a few unknown facts about Sarah Ryan;

When did Sarah Marshall and Matt Ryan get married?

The couple got married on April 8, 2011. However, they started dating in college when Sarah was 18 years old. After seven long years of dating, they finally tied the knot.

In addition, Sarah and Matt also have twins, whom they welcomed in 2018.

Does Matt Ryan have a twin brother?

According to different sources, it is said that John Ryan is the twin brother of Matt Ryan. However, it is yet to be confirmed.