IFFA (International Federation of Football History and Statistics) claimed Cristiano Ronaldo as the World’s Best International Goal Scorer of XXI Century (2001-2020), has a whopping net worth of $500 million.

Not to mention, CR7 also became the first footballer to earn more than $1 billion in his career.

Likewise, back in 2009, Cristiano was transferred to Real Madrid, and his transfer is one of the most expensive football transfers, worth €94 million.

Nonetheless, Ronaldo has been playing professional football since 2002, at the age of 18. Since then, he has earned over 170 caps which includes appearing and scoring in ten major tournaments.

Before exploring Ronaldo’s net worth, let’s have a look at some of his quick facts.

Cristiano Ronaldo: Net Worth and Income

It is praiseworthy that Cristiano Ronaldo has accumulated a net worth of $500 million. Not to mention, Ronaldo is one of the highest-paid players in football history.

Undoubtedly, he earns a lot of money from brand endorsements and sponsorship deals. Besides, it is estimated that Ronaldo earns around $50 million from endorsements.

As per sources claim, in 2020, Ronaldo earned around $120 million, of which $70 million is from his salary, and the rest of the 50 million is from the endorsements of reputed brands like Nike, Clear Shampoo, and Herbalife.

One of the biggest brands Cristiano worked with is Nike. In 2016, the Portugese signed a $1 billion “lifetime” deal with the sports brand.

Despite the secrecy of the deal, it is believed that the deal between two significant powerhouses came for $100 million in signing bonus alone.

Besides, Ronaldo has a four-year contract with Juventus, which earns him $64 million annually from that deal.

For someone like Ronaldo, who earns millions, his home is expected to be nothing less than a mansion. Currently, the Portuguese striker and his family of five are residing in their Italian property.

Besides, Ronaldo’s Italian house consists of a luxury indoor and outdoor pool; and this villa is beautifully clad in monochrome marble and twinkling ceiling lights.

Similarly, his lavish house has a nursery and playroom for his children. Likewise, there is a swimming pool, jacuzzi, and a gym.

Added to that, the mansion consists of six bedrooms and six bathrooms. Ronaldo moved here with his family in 2018 after his transfer with Juventus was complete.

Eddy Merckx Net Worth | How much the racer has? >>

Well, Cristiano yet another property in his hometown, Madeira. His £7 million Madeira house consists of seven bedrooms, eight bathrooms, a swimming pool, and a gym.

But what takes the prize is the rooftop pool lined with glass railing, overlooking the Atlantic Ocean, which is absolutely breathtaking, to say the least.

During his tenure at the Manchester, young Ronaldo lived at the exclusive Alderley Edge area, just like his teammates.

There, CR7 bought a £3 million mansion consisting of five large bedrooms with everything that anyone can ask for. Besides, the house was also equipped with his and hers dressing rooms, swimming pool, jacuzzi, gym, and a cinema room.

However, in 2009 Ronaldo rented out this lavish mansion for $7.9k per month. Finally, Ronaldo sold the property after nine whole years.

This apartment is located in Manhatten, Trump Tower, with a splendid view of Central Park.

After his record-breaking move to Real Madrid, Ronaldo needed a suitable home for his stay. For that, the striker chose a £4.8 million stunning La Finca neighborhood, designed by architect Joaquin Torres.

Likewise, Cristiano’s lavish home featured a state-of-the-art gym, fully equipped indoor and outdoor swimming pool, and lounge area. The house even has its own football pitch where the player regularly played.

Cristiano Ronaldo is someone who lives for thrill, and what a great way to experience it than with a fast car. Similarly, CR7 has a great interest in cars and has spent millions on various luxurious cars.

Some of his expensive splurges include 19 cars so far.

Does Cristiano Ronaldo own a private jet?

It comes as no surprise that Ronaldo has a private jet of his own, not once but two!

Nonetheless, his luxurious jet consists of a kitchen, two bathrooms, eighteen seats which can be later transformed into nine beds.

Similarly, another private jet, the Gulfstream G200, one of the fastest private jet, cost him €20 million. The jet has a top speed of 560 mph.

There is no doubt that Cristiano Ronaldo, who has a net worth of $500 million, lives a lavish life. He spends millions of dollars on luxurious cars, homes, jets, etc.

However, this celebrity footballer doesn’t have to spend a lot of money due to his numerous sponsorships covering his expenses.

Used to an expensive lifestyle, we can see Ronaldo wearing a Rolex GMT-Master II Ice worth $500,000.

Frank Muller Cintrée Curvex Tourbillion, Rolex Sky-Dweller, and Hublot Spirit of Big Bang are some of the other exotic watches he owns.

Despite his hectic schedule, Ronaldo enjoys exotic holidays with his family. In 2019, Ronaldo’s vacation in Greece on a superyacht became the talk of the town.

Recently, in 2020, Ronaldo had to face a lot of backlashes for violating COVID-19 rules. For his girlfriend’s birthday, the family went on a trip to Mountain Resort.

However, Ronaldo and his girlfriend were fined $485 each for violating the COVID-19 travel rules.

While most people are inside their homes due to the COVID-19 pandemic, Cristiano Ronaldo was busy exploring his own private island with his son. Yes, you heard it!

Despite the proof, many claimed that Cristiano could not own the island, but later Cristiano himself shared a picture of his with his son with the caption:

“Discovering my island with the best company.”

Apart from being a good player, Ronaldo is a great human being as well. He has been helping needy people as much as he can.

Ronaldo has even auctioned his prestigious award, the Golden Boot, which he won as a top scorer in Europe.

However, from the auction, Ronaldo raised more than £1 million, and the funds went to Gaza to make schools.

Likewise, in 2020, he even gave up three months’ pay to help people during the COVID- 19 pandemic. In total, he gave up €3.8 million to help the needy.

Similarly, he donated £1 million to supply beds, fans, and infusion pumps for hospitals in Portugal. Undoubtedly, Ronaldo has a heart of gold.

More than 40% of the money Cristiano earns is from brand endorsements. As Cristiano is one the biggest names in the world, undoubtedly, the brand endorsed by him would be of great value.

He has also promoted a hair transplant company and nutrition company, Herbalife, by charging $44 million.

Talking about his investments, Cristiano has invested in clothing brands, hotel chains, hair care, perfumes, fragrances, and many more.

Similarly, when Ronaldo isn’t using his private jet, he rents out the aircraft for £3000 per hour. As per reports, Ronaldo has earned around $1 million a year from that venture. 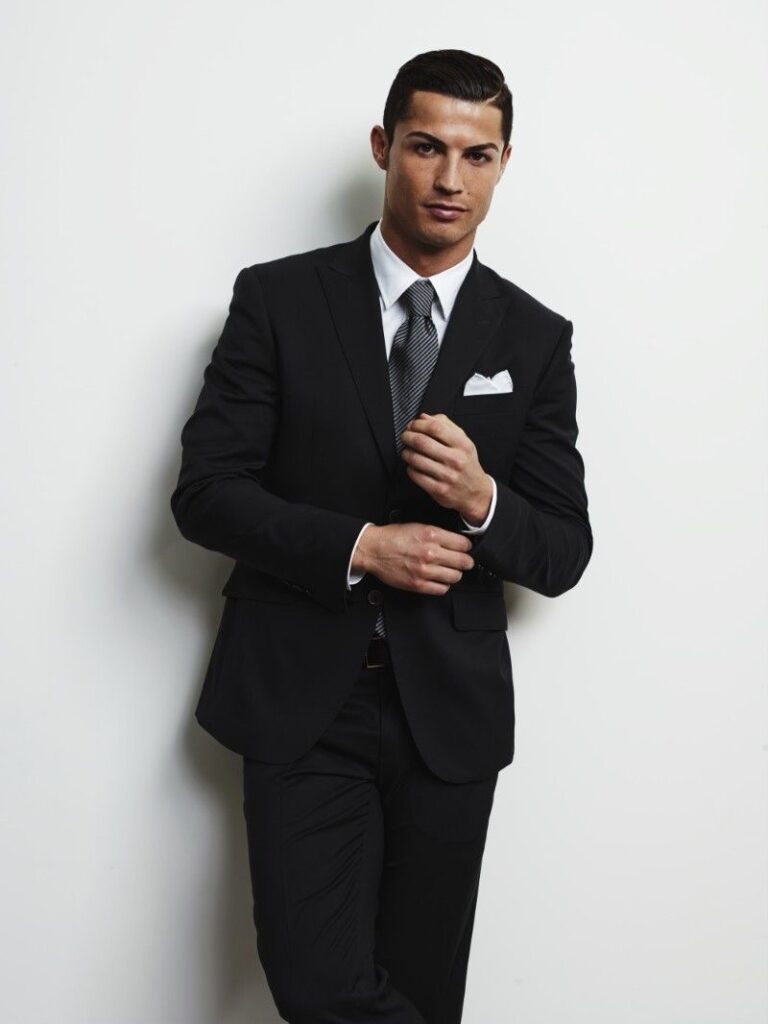 Textile and fragrances are another business of this football star—similarly, adults and young kids prefer a wide range of CR7 underwear. Hence, Ronaldo generally models himself for that to increase sales.

Cristiano Ronaldo – The Biography is one such book written by Guillem Balague. The book even won book of the year in 2016.

Who is the richest player: Cristiano or Messi?

Messi is one of the richest players in the world, with a net worth of $600 million. At the same time, Ronaldo comes in the second position with $500 million.

In 2020, Forbes estimated Messi’s total earnings to be $126 million, from which $34 million is from brand endorsements, and $92 million comes from salary.

Talking about the beginning of Ronaldo’s career, Ronaldo was signed by Real Madrid. At that time, Ronaldo earned $37 million every year.

Similarly, as per reports, Ronaldo earned $109 million in 2019, making him the second-highest-paid athlete after Messi.

However, Cristiano is also called the world’s first Billionaire soccer player after cracking a $1 billion endorsement deal with Nike.

Cristiano Ronaldo is quite active in social media. He shares a lot of pictures of his girlfriend, children, vacations, and many more.

Not so surprising, Cristiano Ronaldo is the most followed person on social media. As he is the number one athlete and followed by many, Ronaldo earns around $889,000 per post.

As per various sources, Ronaldo earns around $1 million from Instagram per post. Similarly, this makes his Instagram-related revenue $23.3 million a year.

What was Cristiano Ronaldo’s childhood nickname?

Was Ronaldo expelled from school?

Yes, Ronaldo was expelled from school at the age of 14.