Everything About Jamie Anderson

Jamie Anderson is one of the most well-known names in international snowboarding, having grown up in front of a global audience.

Anderson will attempt an unprecedented three-peat in the women’s slopestyle at Beijing 2022 while aiming for success in the big air.

Jamie Anderson has established a reputation as one of the world’s best female snowboarders, having won a record 19 X Games medals since she was 15 years old.

Moreover, this season, Jamie went undefeated in Slopestyle and won SNOWBOARDER’s “Triple Crown” by winning gold at the year’s three most significant events: X Games, Dew Tour, and US Open.

Furthermore, she was also named Women’s Rider of the Year for 2020. Let’s discover more about this elite snowboarder through this article.

But before, we have presented some quick facts.

Jamie Anderson has established herself as one of the best slopestyle riders globally.

She was one of the most successful female snowboarders on the Swatch TTR World Snowboard Tour.

In addition to her numerous career victories, Anderson has given back to the snowboarding community by participating in the High Cascade Snowboard Camp.

Anderson began snowboarding in 2000 when she was nine years old and received a hand-me-down snowboard, and was qualified for the 2004 Winter X Games four years later.

Furthermore, she won a bronze medal in 2005, becoming the competition’s youngest female medalist at 15.

Furthermore, she won the quarterpipe event at the O’Neill Evolution in Davos, the Billabong slopestyle Jam, and the Abominable Snowman during the 2006–2007 season.

Making it to the Top

Anderson’s TTR World Tour season got off to a promising start with victories at the 3Star Billabong Bro Down in Australia and the 5-Star Burton New Zealand Open slopestyle.

Anderson then returned to the TTR Tour, winning the Roxy Chicken Jam US slopestyle title and finishing on the podium at the Burton US Open slopestyle.

Anderson won gold in the Olympic debut of women’s snowboard slopestyle at the 2014 Sochi Winter Olympics.

Anderson won her second Olympic gold medal in Pyeongchang, South Korea, during the 2018 Winter Olympics. In addition, she also took silver in the major air event.

She also competed in the 2019 FIS Snowboard World Championships, where she won a bronze medal.

Moreover, she denounced FIS President Gian-Franco Kasper in response to a Deadspin article in which Kasper “denied the existence of climate change, spoke about immigrants, and lauded the ease of working with dictators to plan Olympic Games.”

Her winnings from that event were donated to Protect Our Winters, and she urged her fellow competitor.

Anderson won a gold medal in the slopestyle event at the 2020 Burton US Open and the 2020 Winter X Games Aspen, becoming the most-medalled female competitor in X Games history.

Anderson appeared on the seventh season of The Celebrity Apprentice in 2015 to raise funds for her charity, Protect Our Winters. Unfortunately, in the fourth episode, she was fired.

To add on, Jamie was announced as one of the celebrities who will compete on season 26 of Dancing with the Stars in April 2018.

Artem Chigvintsev, a professional dancer, was her partner. She was eliminated in the first episode and finished ninth overall.

Moreover, Jamie collaborated with other female snowboarders to create Full Moon, a multi-year film project, in 2015.

2016 was one of her best seasons to date, with two World Championship titles in Slopestyle and Big Air, as well as the crystal globes for overall freestyle snowboarding.

The Californian has been an established snowboarder for more than half of her life, having wowed fans since her X Games debut in 2005 at the age of 13 years.

Since then, Anderson’s success has exploded with medals, records, and adoration piling up over the last decade and a half.

To point out, Anderson won her seventh X Games gold medal in the slopestyle earlier in 2021 and her 18th medal overall.

Moreover, the skier is now tied for second on the Winter X Games medals list with fellow US legend Shaun White, and she is the most decorated woman at the event.

Anderson, the fifth of eight homeschooled children – five sisters and two brothers – was born in South Lake Tahoe, California, where the skier developed a love of nature’s playground.

Being homeschooled played a vital role in her early development, as she began playing the sport at the age of nine.

Joanie, her older sister, was also a competitive snowboarder, winning gold in the boardercross event at the 2007 X Games.

They made history by becoming the first siblings to win gold at the same X Games.

Furthermore, in an interview with Fox Business, Anderson revealed that she enjoys needlework and crocheting hats in her spare time.

Anderson bought her mother an alpaca farm in Vermont, intending to use the farm’s wool for a possible future shift into fashion.

Jamie Anderson, a two-time Olympic gold medalist, has proposed to her long-term partner, Canadian snowboarder Tyler Nicholson, only weeks before the 2022 Winter Olympics.

Jamie Anderson and Tyler Nicholson have something to be excited about ahead of the 2022 Olympics in Beijing! 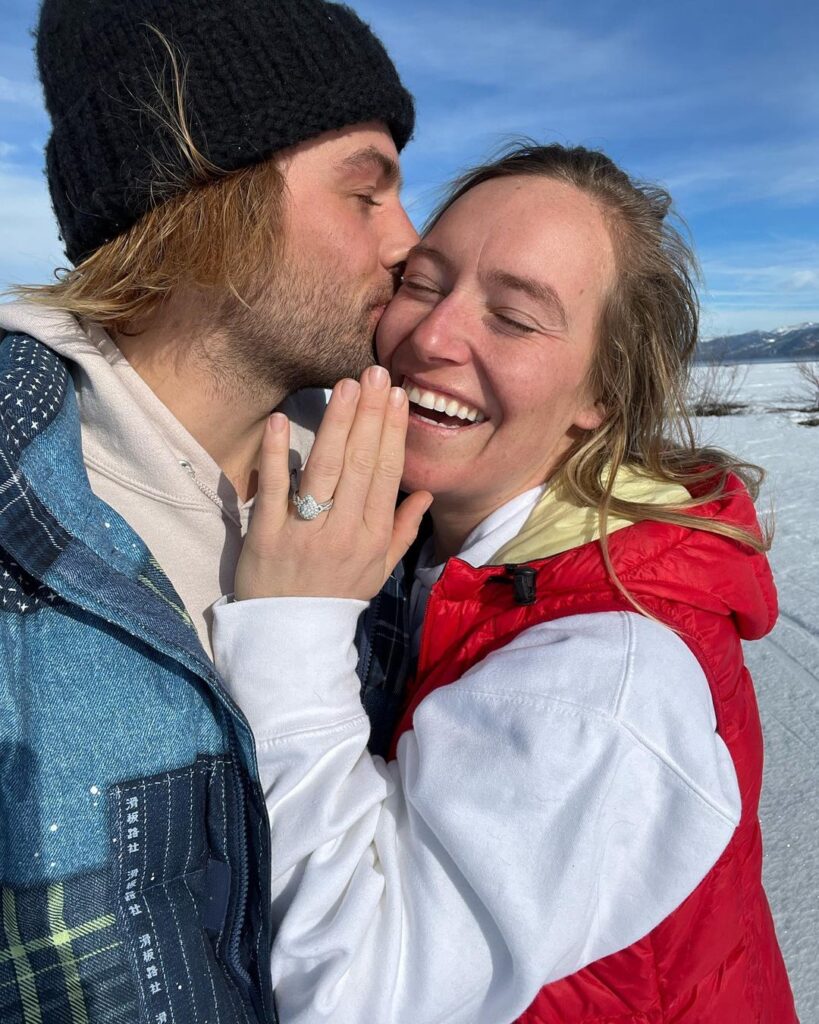 The Team USA snowboarder revealed her engagement to the Canadian snowboarder during a segment on Today.

Moreover, Anderson also shared a video of Nicholson, 26, getting down on one knee and proposing to his longtime partner in the most natural setting: the snow.

Nicholson also competed in the Pyeongchang Games, finishing seventh and 13th in the men’s slopestyle and big air events, respectively.

In 2015, Anderson and Nicholson began dating. Furthermore, in 2018, she told Us Weekly, “My boyfriend and I met snowboarding in Colorado.”

Anderson approaches her health, life, and sport holistically, whether it’s through meditation or supplementing her diet with superfoods.

Anderson, an Ayurvedic medicine student, believes in finding a balance between the mind, body, and spirit.

Shredding slopes, landing jumps, and sliding rails aren’t typically associated with locating your center, but she has a method to her madness.

“Staying in the moment wherever you are is critical, especially at this event with so much going on,” Anderson told the Olympic Channel.

Moreover, Anderson spends a large portion of her life outdoors, so it’s no surprise that she’s acutely aware of nature’s decline.

The eco-life activist is inextricably linked to nature, and she has emerged as a powerful voice in the fight against climate change.

Anderson has witnessed firsthand how her playground is evolving.

Don’t miss out; 17 Best Winter Sports in the World>>

Given the extreme behavior of snowboarding – the high-speed flips, twists, and turns – it’s no surprise Anderson has suffered a number of injuries.

Unfortunately, Anderson sustained a serious injury in 2009 when she was 17 years old when her spleen was punctured during practice at the US Open.

Anderson’s injury landed her in the intensive care unit and served as a wake-up call for her to take better care of her body.

However, Anderson has adopted a healthier lifestyle, including yoga, in order to prepare her body for the rigors of the sport.

Jamie Anderson is a $4 million net worth American professional snowboarder.

Anderson has been a very successful Winter X Games competitor, as well as a favorite of sponsors and advertisers.

Jamie has won numerous Open competitions over the years, including the US, New Zealand, Burton European, Australian Opens, and the Garnier Fructis Australian and Nissan X-Trail Nippon Opens.

In addition, she is also the reigning champion of the Women’s Swatch TTR World Tour.

Jamie Anderson grew up in the mountains of Lake Tahoe, California, and has spent her life pursuing her dreams and educating others about the importance of our environmental impact.

Snowboarding has taken Anderson worldwide, providing her with numerous opportunities to meet amazing people and make a difference in the lives of others.

Jamie’s mission is to spread love and support the youth in her community so they can live an active and healthy life, be positive role models, and be the next generation of environmentalists through the sport she adores.

Jamie established the Jamie Anderson Foundation in 2013 as a way for her to give back to youth by supporting their dreams and inspiring them to be community and environmental leaders.

Moreover, their mission is to provide young athletes with the opportunity and financial support to participate in winter sports, chase their dreams, and connect with the environment.

Since the Foundation’s inception, they have provided over 30 young winter sports athletes with equipment, clothing, season passes, and financial assistance to enable them to compete in USASA national competitions.

As per her, by introducing future generations to winter sports and providing them with access to the mountains, they are naturally guided to care for the environment and create a social movement.

Jamie Anderson is pretty active on various social media platforms. The athlete uses her social media to connect with her fans and followers.

You can follow her on Instagram to keep updated about her life. She is there under the username @jamieanderson.

Moreover, the athlete often posts stunning pictures of her that have lured many followers to her profile. As of January 2022, she has gained more than 516k followers.

How many Olympic medals does Jamie Anderson have?

Jamie Anderson understands how important the Olympics can be for an athlete.

Moreover, she has two gold medals from slopestyle and one silver from big air added to the Olympic program four years ago. In addition, she’s made a fortune, thanks in large part to her outstanding performance on the world’s biggest stage.

Where does Jamie Anderson live?

Jamie Anderson is now based in Whistler, British Columbia.