JaVale McGee is a well-known American basketball player who is presently playing for the Phoenix Suns of the NBA.

McGee has been acknowledged for his exceptional basketball talents and has grown his fan base by playing for eight different NBA teams.

Not to mention, he has won the NBA Championship three times and just won an Olympic gold medal in basketball in 2021.

Moreover, he has a massive frame that permits him to gain strength while still maintaining his quickness and athleticism.

JaVale can even make drives or spot up with his back to the hoop and has a competitive mentality on a basketball court.

Apart from his competitive game qualities, he enjoys having fun on the court and occasionally makes people happy with his odd behaviors.

Let’s check at JaVale McGee’s personal life and much more, but first, let’s look at some of his quick facts.

JaVale was born in Flint, Michigan, to parents George Montgomery and Pamela McGee on January 19, 1988.

Moreover, JaVale is a brother of Imani McGee Stafford, a college basketball player at the University of Texas at Austin. His other two sisters are Tiffany Montgomery and Dorien Montgomery.

Pamela McGee, McGee’s mother, was a WNBA professional basketball player and an Olympic gold medalist in basketball. Similarly, her twin sister, Paula, was an all-American who led the USC NCAA national championship team.

JaVale believes he grew up in poverty, but he had a happy childhood.

McGee’s determination to pursue a basketball career and his basketball talents are unquestionably in his DNA. Pamela McGee is incredibly proud of her children.

When she was in her twenties, Pamela had JaVale and chose to raise him as a single mother. Pamela was a well-known and fantastic basketball player; thus, JaVale grew up witnessing basketball players.

Growing up with a sporty mother who has a history of bringing gold medals home, JaVale used to play one-on-one with his mother and beat her up in the early days. However, there were rules to the game.

They also used to play chess, checkers, and monopoly, and they were usually involved in games. Pamela first refused to allow him to pursue a basketball career since his game was not particularly great.

In addition, JaVale’s mother has always been his coach and mentor, who also coached Javale throughout his freshman and sophomore years of high school.

Adidas sponsored Pamela during her basketball days; therefore, JaVale wore a brand most of the time, leading his peers to believe he was a wealthy youngster.

When he was on his high school team, he was played in both small and power-forward spots.

Later, to enroll in his college degree, he joined the University of Nevada, playing basketball for three years.

He played as a starter, and in his sophomore season, he showed his incredible basketball abilities, scoring 14.3 points and 7.3 rebounds.

In freshman season, JaVale showed his career-best six rebounds and made his appearance in 33 games.

JaVale started his first NBA career as a Washington Wizards player when he got selected 18th overall in the 2008 NBA Draft and signed a two-year deal with the Wizards worth $2.4 million.

McGee was being investigated for having a gun in the wizards’ locker area, but he blamed it on his teammates.

Moreover, JaVale spent five seasons with the Wizards, and during those seasons, he participated in the 2011 NBA Slam Dunk Contests and used three balls at one time.

He departed the Wizards in 2012 after numerous controversy and some record-breaking performances and was ultimately traded to the Denver Nuggets.

Similarly, in his first appearance with the Nuggets, JaVale made the game-winning dunk off an Arron Afflalo missed throw, and later on July 18, 2012, he again signed on four years and $44 million deal with Nugget.

In his 2015-16 seasons, McGee signed a deal with the Dallas Mavericks, and his injury of stress fracture made him be out of 13 games with the team. He made his debut in November and played eleven-minute off the bench.

JaVale made his 2016-18 seasons with Golden State Warriors, where he signed in September. His early seasons with the Warriors were impressive he continuously won against the Knicks, Rockets, and Claviers.

He played in 77 season games with the Warriors and signed with them in August 2017. His efforts to the team led him to be a second straight championship in the finals.

McGee returned to Denver in March 2021; now, he is playing for Phoenix Suns.

JaVale was asked to join the United States men’s basketball team in the summers of 2009 and 2010, and he participated in the 2010 World Basketball Festival with Team USA.

Later on, in 2014, McGee was asked to play in the 2014 FIBA Basketball World Cup in Spain, which he could not participate in because national teams were narrowed to one naturalized player apiece.

Finally, in July 2021, JaVale got a chance to play in replacement of Bradley Beal and Kevin Love in the 2020 United State men’s Olympic basketball team.

His hard work for the team led him to bring an Olympic gold medal home in defeat to France. He and his mother became the first son and mum duo to win the Olympic medal in history.

When it comes to training and playing games, an athlete’s body shape is always important.

JaVale McGee, a 34 year old  Michigan-born basketball player, his workout routine is always an essential part of his daily routine.

Born in an athletes’ family, his physical form is ideal, and his height of 7 feet or 2.13 meters allows him to score quickly.

He weighs 270 pounds (122 kg), which is a healthy weight for an athlete. With his athletic body, JaVale slays on any outfit every time.

JaVale McGee has always surprised people with his crazy behavior, whether it’s kissing a fan or debuting his new wild hairdo.

JaVale announced on his social media accounts that he would be wearing that hairstyle in 2017 and that he was thrilled to show it off.

Also, His hairdo drew a lot of attention, and it was even featured in a humorous NBA meme.

McGee has earned enough money to live a comfortable and lavish life with his family after playing for various NBA clubs with multi-million dollar contracts.

His exact net worth is unknown. However, it is estimated to be $14 million.

His total recorded salary is $5,000,000. You can check out his past salaries with NBA teams on Hoopshype.com.

Also, read about NBA: Top 10 Best Centers of All Time>

The duo’s initial meeting, though, isn’t confirmed. In 2016, the couple welcomed their first child, Genevieve Grey McGee, and are ready to welcome their second one.

Genevieve, JaVale’s firstborn, is still little, but she can already demonstrate basketball skills that her grandma, Pamela, has captured and shared on Instagram posts.

Before starting her modeling career, Giselle Ramirez worked as a real estate agent. Even today, despite her pregnancy, she maintains her good looks and looks stunning.

JaVale McGee has a close relationship with his mother, who is not only a mentor and a mother to him but also his business manager.

Furthermore, JaVale pulled a joke on his mother with a surprise birthday vlog in one of his YouTube videos, and her mother’s response was hysterical. Check that on YouTube.

Similarly, JaVale’s sister, Imani McGee, adores him and has posted about him stating his mother has raised a superstar.

McGee recently posted on his Instagram account about playing hockey where he went to waste management open in phoenix.

JaVale was also nominated for a Grammy for his work as a producer on Justin Beiber’s album “Changes.”

In addition, during his game as Nuggets, JaVale kissed an old Denver fan, and her reaction was priceless. Check that on YouTube.

JaVale is the founder of Juglife foundation, where he has been influencing people to drink clean water.

He began this charity as a hashtag to encourage people to drink water daily as he was upset as his hometown does not have access to clean water. 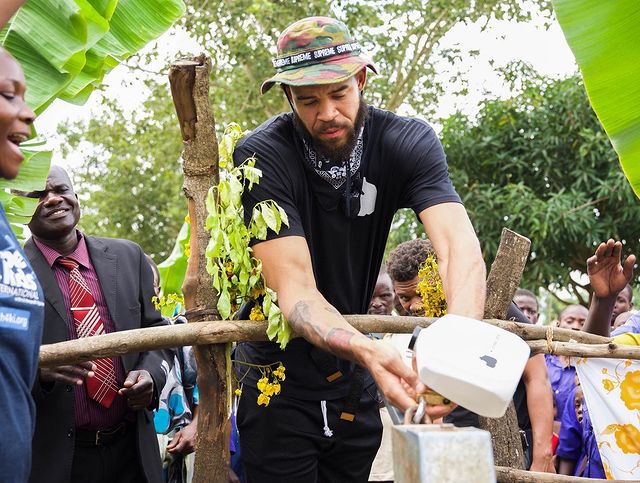 Then his business partner’s uncle, a philanthropist, suggested that polluted water is affecting the lives of the people in Uganda and that there could be an opportunity to build a water well.

They believed it would be an excellent chance to help others, so he founded Juglife and continues to support the foundation, Juglifewater.com.

When it comes to social media presence, JaVale is social media savvy and often updates his fans on what’s going on in his life.

All of his social media profiles have been verified and have a large number of followers.

You can follow JaVale McGee on his social media accounts through the given link below.

What was JaVale McGee’s GPA in high school?

JaVale graduated with a 4.5 GPA from Hales Franciscan High School.

Does JaVale McGee have gold teeth?

Yes, JaVale has golden teeth, and he’s taken basketball fashion to new heights with them.

What jersey number did JaVale McGee have throughout his basketball career?

JaVale has worn jersey numbers 34, 1, 11,7,6, and 00 throughout his basketball career with different NBA teams.

All About Carmelo Anthony Son