Apart from being an unbeatable power forward for his team, Kornet is an equally talented golfer.

Kornet’s high school coach had said him to be “the most naturally athletic golf swing in the school’s history.”

But since his childhood, there was a basketball atmosphere around him, which later led him to choose his career path.

Kornet is the all-time NCAA leader for 3-pointers made by any player 7 foot or taller.

Kornet studied at Liberty Christian School in Argyle, Texas. It is part of the Texas Association of Private and Parochial Schools (TAPPS).

Commodores’ Luke is the all-time leading shot-blocker for their team.

Defeating Auburn in a 75–57 win, Kornet blocked a school-record ten shots and finished with the second triple-double in Vanderbilt history with 11 points and 11 rebounds.

For the 2017 NBA Summer League, Kornet joined the New York Knicks after going undrafted in the 2017 NBA draft.

Kornet signed a two-way contract with the Knicks on July 03, 2017, which would get him the salary based upon the league he is assigned to play.

“I’m just trying to come out and make the most of it, create some offense and be solid on defense,” Luke said about his debut match.

On his debut game against NBA’s Toronto Raptors, Kornet’s parents came to support their son in Toronto.

Making himself and his parents proud, he scored a double-double with 11 points and ten rebounds within 22 minutes of the game.

Luke became the first in NBA history to post three- points and four blocks in his debut and second to debut with a double-double in Knick’s rookie history.

With all the highs and lows, finally, on July 6, 2018, the Knicks signed a standard contract with Kornet.

Chicago Bulls signed Kornet for two full seasons from 2019 to 2021.

On March 25, 2021, a three-team trade was made between Boston Celtics, Chicago Bulls, and Washington Wizards.

For a short time, Kornet played with the Celtics.

After the previous contract matured, Kornet re-signed with the Celtics but unfortunately was waived that day.

During the contract with Cleveland Cavaliers, Kornet had played over 133 career NBA games with 35 states.

Luke ended with 4 points, three rebounds, and three blocks in 26 minutes during a 96-92 loss to New York.

He signed a deal with the Cavaliers at the end of December for ten days.

Luke got to play two games for the team averaging 2.0 points and 1.5 rebounds in 7.4 minutes into the game.

A 10-day contract with Milwaukee Bucks on Jan 3, 2022, was signed under the COVID-related hardship allowance.

He even got ruled out for the game against the Warriors on Jan 14. Luke only played a single game with Bucks.

After Maine Celtics reacquired Kornet on January 14, 2022, he hasn’t played in any games (8) he participated.

Luke returned to Boston on February 11, 2022, agreeing to a rest-of-season contract.

Father Kornet was the 30th overall pick in the second round of the 1989 NBA draft by the Milwaukee Bucks.

Frank Kornet’s basketball career was limited to five seasons. However, he played two seasons in NBA with the Bucks averaging 1.9 ppg in 89 games.

Nicole Kornet, Kornet’s sister, is the 6’1″ guard who also played basketball at Oklahoma and the University of California, Los Angeles.

She matched in about 101 games while in Oklahoma and was honored with various titles. As for her studies, Nicole majored in sociology.

Luke is married to his beautiful wife Tierney Price, whom he met while attending Vanderbilt University back in 2015.

She was born in October 1995 in The Woodlands, Texas, to Maura Price and Rob Price. Tierney has two brothers, Brady and Tyler.

Tierney attended Woodlands College Park High School doing track & field and soccer. She graduated with a Bachelor of Arts in economics from Vanderbilt in 2017.

She works at the Deutsche Bank as an FX Risk Advisory & Sales analyst, where she previously was an intern.

Tierney also did a marketing internship at Go Think! in 2015 and was a sales representative for EmbroidMe in 2013.

Luke proposed to her in 2018 at the Wagner Cove in Central Park, finally getting married a year later in August. They spent their honeymoon in Hawaii.

All thanks to his sharpshooting skills, on the first two games for the Boston Celtics, he averaged 9.0 points on 63.6 percent shooting, eventually earning the nickname.

This also happened from the first two games when he used his big body to slow down the opposing offenses while forcing the defense to respect his range and defensive capabilities.

Luke shot with a great deal of touch from behind the arc, mesmerizing the team.

Celtics General Manager Aingee referred to him as “Big Bird” on the game with Chicago Bulls after a booming dunk he did on April 19, 2021.

The total earnings of Luke come majorly from his basketball career. He has a net worth of $2 million.

Some interesting facts: Who is Amy Mickelson?

So if you want more of Kornet’s life, you can follow him there. 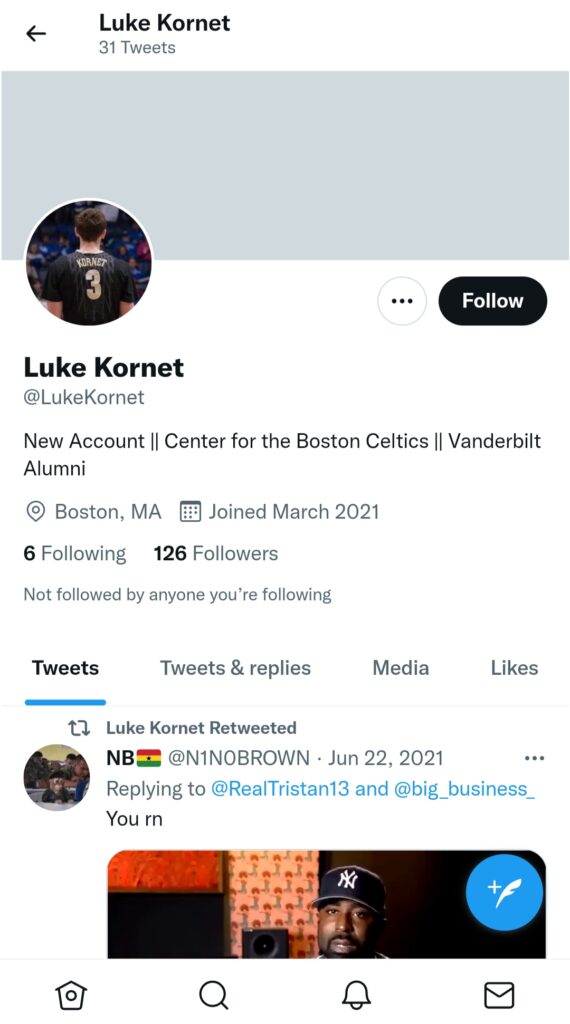 But, if fans want to see more photos, you can snoop around his sister’s IG account.

He seems to be a very private person who wants to keep his personal life far from the limelight.

Has Luke Kornet had any injuries?

About two years ago, Luke had major foot and ankle injuries which kept him out of the game for six-eight weeks.

What did Luke Kornet major in?

Luke was so advanced as a child that his parents started him a year early in school. So, along with playing for the university’s basketball team, he completed his degree in computer science.

What is Luke Kornet’s current 2022 rating?

He has an Overall 2K Rating of 71 with a Build of a Paint Defender and a total of 1 Badge.