Nick Burdi is a young MLB prospect struggling with injury problems. The American baseball pitcher is currently a free agent. Before choosing free agent, he played for the Pittsburgh Pirates of Major League Baseball.

He got into baseball from a very young age. His throws and sliders’ speed attracted many teams and scouts after he joined the Downers High School. After Downers, he played for Louisville Cardinals, where he threw his fastballs over 100 mph.

Minnesota Twins first picked him in the 2014 MLB Draft. His name was listed on the future MLB Stars list. Sadly, the right-handed pitcher had a bumpy career due to injuries and never reached the expected heights. However, he is hopeful that his hard work and dedication will pay-off one day.

Before diving into details of his life and career, first, take a look at some general facts:

Nicholas Edward Burdi was born on January 19, 1993, to his parents Bob Burdi and Debbie Burdi. He grew up with his family in Hinsdale, Illinois, United States. Besides, he has an elder brother, Drew, and younger brother Zack. 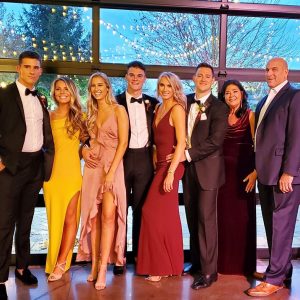 Nick’s mother, Debbie, was a standout track athlete while playing for the high school team. After retiring from track races, she is now into golf and ski. She has her success as a golfer and skier. Bob thinks Nick and his brothers got those athletic powers from his mother.

Nick came from a baseball-crazy family. His father used to watch baseball with great enthusiasm. That led Nick and his brothers to the sport from a very young age. As a kid, he attended the baseball matches in the stadium with his father. He says he wanted to play in MLB right after attending the first game.

Nick gives massive credit for his success to his father, Bob. He has said on many occasions that his father always pushed him to succeed in his career.

Nick completed his high school education at Downers Grove South High school, where he played baseball as a pitcher. After graduating from High School, he joined the University of Louisville. Later, he graduated from university with a major in sports administration.

Who are Nick’s brothers?

As we know, Burdi has two brothers, Drew and Zack. Coming from a family with a sports background, both were involved in sports from a very young age.

His older brother, Drew, played football for Downers Grove and was an All-State quarterback. After High School, he also played for Western Broncos Football Team.

Zack, the youngest boy of the Burdi family, is also a professional baseball player in MLB. He currently plays for Chicago White Sox as a pitcher and throws at over 100 mph. Like his brother Nick, he also played for Louisville Cardinals. White Sox picked him in the 2016 MLB Draft.

He has a fair complexion with short black hair and blue eyes. Due to his eye problems, he wears glasses like Ricky Vaughan in the movie “Major League.” However, his fans find him more attractive in glasses.

Not the season I had hoped for but to avoid another surgery is already a step in the right direction. Thanks to everyone who has reached out! Part of the journey!

As of now, Burdi is now 27 years old, and his birth sign is Capricorn. Moreover, American National Nick belongs to the mixed ethnic group. However, his religion is still unknown.

As we already know, Nick was keenly interested in baseball from a very young age. He started playing baseball with his father and brothers. His father gave him the opportunities to learn and play baseball.

A few years ago, Nick was viewed as one of the best talents in the MLB. But different injuries never let him develop to that potential. Now, he is playing well, but the fear of injury after multiple surgeries still troubles him.

Nicholas Burdi started playing baseball officially after joining Downers Grove South High School, Illinois. He followed his brothers in high school and played on the high school football team as a quarterback. But his real love was in baseball, so he quitted football to focus on baseball.

Burdi was one of the most talented players on the team. He threw as fast as 95 mph (154 km/h) as a High School player. That figure was not usual for high school students. He caught the eyes of many scouts with those balls.

In the summer of 2010, he participated Area Code Games, where he performed his best once again. Many Scouts like Keith Law were impressed by his throw. Next year (2011), he was thought to be selected inside the first eight rounds of the MLB Draft.

He was awarded All-American, All-State, and All-Conference honors while being 22-2.

Sadly, Minnesota Twins picked him up as a 748th overall pick. Nonetheless, he chose to join the University of Louisville. He played college baseball for the Louisville Cardinals Baseball Team.

Burdi got the chance to collect a lot of experience from the Cardinals. He played collegiate summer baseball from Chatham Anglers of the Cape Cod Baseball League in 2012. Burdi was already throwing few 100 mph balls by the end of the 2012 season.

Moreover, he finished his sophomore year pitching 342/3 innings with an earned run average of 0.78 & 60 strikeouts. He continued his excellent form in junior year with 0.49 ERA and 65 strikeouts in 37 innings.

Before the 2014 MLB Draft, Burdi was counted as one of the best talents in the draft. Minnesota Twins picked him up in the second round of the draft (46th overall).

Nick was probable to be picked in the first round. So, he was disappointed with the draft pick once again. After the draft, he said, “They’re getting one of the most determined people in the whole draft. I’m not upset, I’m pissed now, and I’m ready to play.”

On June 25, 2014, he signed a contract with Twins, obtaining $1.2 million as a signing bonus. He was quickly sent to the Cedar Rapids Kernels. He played just 13 games for Kernels before getting a deserved promotion to the Fort Myers Miracle.

In 2015, he played for Double-A Southern League club Chattanooga Lookouts. He didn’t perform on the expected level and struggled with a 5.93 ERA. As a penalty, he was downgraded to the Fort Myers but brought back to Lookouts at the end of the season.

After the completion of the 2015 season, he played for Scottsdale Scorpions in the Arizona Fall League.

Injury is the one thing every athlete wants to avoid, but sometimes they get unlucky. The dark side of Burdi’s career began in 2016 when he suffered a severe bone bruise on the right humerus. Subsequently, he missed almost the whole year, playing just three games.

On May 26, 2017, he suffered an injury and did a Tommy John Surgery on his right elbow.

On December 14, 2017, Philadelphia Phillies selected Burdi in the Rule 5 Draft. However, they exported him to Pittsburgh Pirates after just 20 minutes for international slot money. After joining Pirates, he was soon able to impress Pirates’ time, Clint Hurdle.

In July and August 2018, he was sent to Bradenton Marauders and Altoona Curve on a rehab assignment. Finally, the Pirates activated him from the 60-days injured list on September 1.

In September 2018, Burdi made his MLB debut in a match against St. Louis Cardinals. After that, he was expected as the new regular pitcher of Pirates. Unfortunately, he suffered another horrible injury in April and ruled out for the rest of the 2019 season.

Nick made his comeback in 2020, but once again, he went through Tommy John surgery in October 2020. On November 1, he was outrighted to Indianapolis, Indiana by Pirates, but nine days later, Burdi elected free agent.

Burdi can throw power fastball at over 100 mph and also has a destructive power slider. Despite having so much talent, he has struggled with injury throughout his career. We wish him a fast recovery and a successful career.

In December 2018, Nick married his long-term girlfriend Rebecca, also called Becca. After the marriage, he posted on social media, “It was the day she dreamed of since she was a little girl. December 15 will forever hold a special place in our hearts.”

The couple is living a happy married life. Moreover, the couple is soon expecting a baby, Burdi. Back in June, Nick posted on Instagram, “We can’t wait to welcome you into this world! A baby Burdi.”

Moreover, Burdi likes to watch movies and TV series. Some of his favorite movies are, The Hangover, The Shawshank Redemption, and the series are, The Office and Entourage. Furthermore, he likes to listening to music and hanging out with friends and family.

Burdi is one of the most talented pitchers in the Major League. Twins selected him in the 2014 Draft. Burdi made his debut in 2018. In total, he has earned more than $2.5 million and has a long career ahead of him. Additionally, he earns an extra from sponsorship and endorsement deals.

According to online sources, Burdi has a net worth of $1.5 Million.

Even if you are not a fan of basketball, there is no way that you would not have heard of the phenomenon known as...
Read more

Matt Mitrione is a well-known American mixed martial artist with excellent skills who fights in Bellator MMA. Known for knocking out opponents with his...
Read more

Cairo Santos has proven himself to be one of the most consistent American football placekickers in the National Football League(NFL). The professional kicker Cairo...
Read more

Daniel Ryan Cormier is one name that is well renowned among wrestling fans and UFC fanatics. Before making his name as an MMA fighter,...
Read more