This article was last updated by Pranaya Poudel on November 1, 2022

I believe Brazilians are born with an excellent knack for football, and Marcelo Vieira has just that. Their control over the ball, footwork, and agility is impeccable.

There are great Brazilian football legends such as Pele, Ronaldo, Ronaldinho, Kaka, Rivaldo, etc. However, we only knew one fullback hailing from Brazil, Roberto Carlos, who was, in simple words, a beast!

But, Marcelo is in the same category as Carlos. Marcelo operates as a left-back, being inspired by a fellow Brazilian legend.

In like manner, he even plays for Real Madrid as Roberto did. I do not want to compare them because Marcelo established his name despite their playstyle being the same. Marcelo Vieira is in a class of his own.

Marcelo Vieira da Silva Junior, a Brazilian hailing from the city of Rio de Janeiro, was born on May 12, 1988.

Additionally, his parents are Maria da Silva and Marcelo Vieira da Silva. As per the sources, his father used to be a fireman, while his mother is a former teacher.

He grew up in a deplorable state as a child with sister Julia Vieira. Despite the situation, young Marcelo had a dream of making it big one day.

As such, the Brazilian joined a local futsal club and played in a 5A-side team. His grandfather, San Pedro, funded Marcelo’s footballing.

By age 13, the future full-back started playing for the Brazilian club Fluminese. At first, he had to play for the junior team which essentially honed his skills and prepped him for the senior team.

Upon receiving a promotion to the first team in 2005, the Rio de Janeiro native started his professional career.

Generally, football players are preferably tall; the height constraint is beneficial to the Brazilian because he can adequately utilize his pace, agility, and reactions.

It is the reason that makes Marcelo a very dangerous opponent and a great asset.

Furthermore, Marcelo doesn’t have an athletic build, as most players do. But, instead, he made up for it with his excellent technical qualities.

A Versatile player, Marcelo can operate both as a winger and a fullback.

The fascinating aspect of the Brazilian is his touch- the ball control is only out of his world. In addition, his pace and stamina during one-on-ones were a saving grace to his club and country in more than one instance.

A gifted game reader, the left-back can open up opponents’ defenses and is outstanding in the ability to set up fellow attackers for the goal or surprising crosses.

Although Marcelo often uses his left foot, there shouldn’t be any confusion that he is equally adept with his right foot and scoring essential goals on more occasions.

All these attributes made him a reliable partner to Cristiano Ronaldo when he was at Real Madrid. Nonetheless, the Brazilian is questioned by many pundits on his defensive compactness and awareness.

A learner from criticism, Marcelo improved on his weakness and became tactically mobile. After 2011, the most excellent defender in the world, Paolo Maldini, praised him for his performance.

Fellow Brazilian Roberto Carlos admitted that Marcelo is more technically sound than he ever was.

As a matter of fact, Marcelo Vieira has many tattoos covering both of his arms. According to him, those tattoos are the pieces embroidered to dedicate his wife, children, and his precious grandfather.

Alongside his tattoos, he takes them as a source of inspiration and credits his success to them.

Is Marcelo the best left-back in the world? Well, currently, that place belongs to Liverpool star Andy Robertson but before Liverpool’s dominance and when Real Madrid were the Kings of Europe, Marcelo’s position and status remained undisputed.

Regardless of his age, Real Madrid boss Zinedine Zidane, another legend, frequently employs Marcelo for his services in the starting lineup.

Having played both his youth and senior career at Fluminese in Brazil, the Brazilian signed on be the player of Los Blancos, aka Real Madrid, starting from the 2007/08 season.

For 8 million dollars, the signing of such a promising left-back was a steal. To begin with, Marcelo is playing his 12th season for Real Madrid, and in 349 league appearances, he scored 25 goals and assisted 65.

Similarly, the left-back played a total of 97 Champions League games, out of which he netted a goal nine times and assisted 23 times.

For the Copa del Rey competitions, Marcelo assisted only three while netting two goals. Nevertheless, his performance in the Champions League and League matches is what made him praiseworthy.

During his debut and first few games, Marcelo struggled. Due to his defensive instability, he mainly remained a bench player for the then Blancos boss Juande Ramos.

However, when deployed as a winger, the Brazilian quickly adapted to the role, impressing the coach and officials.

Under Manuel Pellegrini, the Brazilian was never a non-starter. Instead, he featured in almost every match and played as a winger on the left flank.

As a player, the Rio native had yet to impress. However, Jose Mourinho, aka the special one, saw massive potential in Marcelo.

The coach confided in him, and his defensive abilities, and the Afro-haired Brazilian, would start as a left-back starting from then on. Critics, coaches, pundits, and players all lauded his performance during the 2010-11 season.

Marcelo had a terrific season and achieved significant milestones in his career starting from the 2012 season.

Being acclaimed by great defenders like Paolo Maldini and Roberto Carlos only became a confidence booster for him.

The Santiago Bernabeu stadium would roar at Real Madrid’s triumph, and Marcelo’s role was creditable. Under Zizou, Zinedine Zidane, and Marcelo had a more significant role to play.

The left-back represented his country at the U17 level with a total of 2 appearances. Similarly, Marcelo debuted for Brazil at U20 in 4 matches.

Since 2006, Marcelo was present as a reserve for Brazil’s national team. With his services, Brazil won the 2013 FIFA Confederations Cup.

Contrarily, all the glory with Brazil came to a halt in the 2014 World Cup when Germany thrashed them 7-1 on home soil.

Even with a shameful defeat, Marcelo didn’t lose hope and strived to improve upon his game.

The following are the list of Marcelo’s career achievements:

Apart from these, the individual honors include;

The defender has hopes of achieving more and has a strict club-level competition with Ferlan Mendy. Nevertheless, I believe Marcelo is hungry to prove more and will play at the highest level for 2-3 years more.

Indeed, one of the most excellent downhill for an athlete is unpredictable injuries. Additionally, Marcelo has also fallen into its abyss many times.

Starting on September 21, 2017, Marcelo Vieira first faced a muscle injury which returned to him again the following year in February. Due to it, he was out for a month and thus, missed six games in tally.

During his tenure, he missed ten games in two months intervals. Moving on, Marcelo also faced numerous injuries at the end of 2019 which include, a neck injury, strain, and, a calf injury keeping him away from the games for a month.

Similarly, his muscular tension was back in March 2020, due to which he stood on the injured list for 27 days.

In the meantime, he also had a tear in the abductor’s muscle, and he missed four games in total.

As for his recent injury, it is again the same muscular problem, which he faced on March 12, 2021. Before that, he also had slight muscular tension in February.

Overall, Marcelo Vieira has been out of the games for 228 days due to injuries and has missed 37 games to date.

From playing in a 5A-side team to playing for one of the biggest clubs in the world, Marcelo started his career in 2002.

Thus, it isn’t surprising as the Los Blancos player has a staggering net worth of $16 million.

At Real Madrid, he currently earns a hefty salary of 100k Pounds a week and a yearly salary of 5.2 million Pounds.

Marcelo is currently with the club Real Madrid since his contract extension on September 13, 2017. Also, the contract is to be valid till June 30, 2022.

The Brazilian has endorsement deals with Adidas and Fly Emirates. Adidas is responsible for providing him with training kits and boots, and hence Marcelo wears Adidas X 19.1 soccer cleats.

In the same way, the deal adds a whopping $5 million to his fortune. Moreover, Marcelo is a proud owner of an Audi worth $550k.

In like manner, the footballer also resides in a lavish house complete with a pool, backyard, and ample space for storing his luxuries.

Besides, to add to his net worth, Marcelo invested in real estate with about $1.9 million.

Net Worth of Marcelo Vieira in Different Currencies

Below is the net worth of Marcelo Vieira in different currencies, including the Euro and Pound:

The renowned left-back is a married man now. Marcelo tied the knot to his longtime sweetheart Clarice Alves in 2008.

Clarice is an actress and experienced Muay Thai player by profession. The following year, the couple announced their son named Enzo Gattuso Alves Vieira in September of 2009. 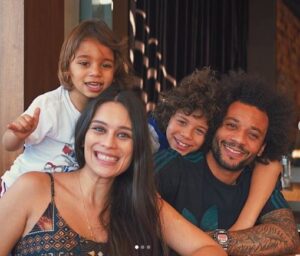 In 2015, a healthy little child graced the Vieira household, a son named Liam. Marcelo’s wife Clarice and their two sons always come to Real Madrid’s home game to support him.

The couple has a healthy, happy life, and in the future, the children also look to follow in their father’s footsteps.

Marcelo is an avid dog lover and owns many of those fluffy ones as an additional dose of fun facts. According to the sources, he has six dogs as pets.

To elaborate, he has a Newfoundland (Lola), two French Bulldogs (Kiara & Ully), a British Bulldog (Thiag), a Miniature Pinscher (Bella), and a Labrador (Nalla).

Which jersey number does Marcelo Vieira feature in?

Although the future is uncertain for now, Marcelo Vieira hasn’t retired from the games, and nor does he have any intentions sooner.

Indeed, he had mentioned he would be staying with Real Madrid till the end of his days, though.

When did Marcelo Announce his Brazil Retirement?

Marcelo announced his Brazil retirement in May 2019.

Will Martin Odegaard Stay At Arsenal?

Top 10 Professional Sports Players Who Are...