Phil Foden is a product of Manchester City youth academy. Currently, the midfielder is playing for the senior team. At the tender age of 19 years, he broke several records.

Most notably, Foden broke the Guinness World Record of being the youngest ever player to win a Premier League medal. He achieved the feat at the tender age of 17 years and 350 days.

This article looks at his record-breaking career to date, his wife, son, family net worth, and transfer market value. So without further ado, let’s get started.

On 28 May 2000, Phil Foden was born to Phil Foden Sr. and Claire Foden. Likewise, Foden grew up in the Metropolitan Borough of Stockport, United Kingdom.

Phil has a little sister who is almost as old as him. However, he is the elder of the two siblings. They are a middle-class family hailing from the Stockport suburb and grew up supporting Manchester City.

The England U-21 midfielder grew up watching the club play at the City of Manchester Stadium (now Etihad Stadium).

Therefore, when the time came to choose the perfect academy for young Phil to develop his skills, Manchester City’s academy was the ideal choice.

He would go on to impress everyone at the Manchester-based club with his mesmerizing performances. Even his parents and family were surprised about how the young midfielder was the best player in his age group.

Eventually, Foden joined the City academy at the tender age of eight. He quickly gained a reputation for himself as he was the best player in every age group he played.

Manchester City even provided a young Foden and his teammates with a limousine for their end of season presentation to perform even better in the coming years. Looking back, I guess it did work as Phil is a tremendous talent now.

During his early years, Foden’s parents prioritized his education over football as he did not have enough time to do both.

From early on in his career, he showed his match-winning potential. Most notably, Foden helped his youth side win the prestigious Neon Cup.

As a result, he won the Best Player of the Tournament award. The Manchester City midfielder’s stock has risen ever since and continues to grow under the tutelage of his current manager Pep Guardiola.

Phil started his professional career with Manchester City after graduating from the club’s academy. He got his taste of senior team football on 6 December 2016 when Guardiola included him in the Champions League game against Celtic, although he did not play.

Then in the following season, young Foden was included in the pre-season tour of the United States. He impressed in the 2-0 loss to Manchester United and started the game against Real Madrid, which they won 4-1.

As a result, Pep said that Phil’s performance was on another level and that he was a gift for the club and its fans. Subsequently, he would go on to play a notable role in the title-winning City squad that season.

Although Foden made several appearances off the bench at the start of the 2017-18 season, his big breakthrough came when he started a UEFA Champions League against Shakhtar Donetsk in a 2-1 defeat.

Hence, the City player became the youngest English player to start a UEFA Champions League game at 17 years and 192 days. Besides, Phil also became the first player born in the year 2000 to match the competition.

The Manchester City midfielder made his Premier League debut in a 4-1 win against Tottenham, coming on as a substitute in the 83rd minute.

Moreover, the 20-year-old became the youngest ever player to win the Premier League winner’s medal, which, as a result, got him into the Guinness World Records.

The same year Foden won the BBC Young Sports Personality of the Year for his impressive performances at the FIFA U-17 World Cup and Manchester City.

Similarly, Phil won the Golden Ball award at the FIFA U-17 World Cup, awarded to the tournament’s best player as the national side won the prestigious cup.

On 5 August 2018, Foden started the FA Community Shield match against Chelsea. They won the game 2-0. It was a momentous day for the young midfielder.

Ultimately, Phil won his third significant honor in just his first year as a professional. Winning three major trophies in a single year is hard enough for a veteran, let alone a then 18-year-old kid.

Further, Foden knew the importance of winning awards. However, it did not faze the youngster as it was only the beginning of his career.

The England U-21 international scored his first goal for the senior team in a 3-0 away win at Oxford United in the EFL Cup.

Later, Phil scored the first home goal at the Etihad Stadium in a 7-0 drubbing of Rotherham United in the FA Cup third round.

The same season, the young City player scored an important goal in the Champions League against Schalke in another 7-0 win.

In doing so, Foden became the youngest Manchester City and youngest English player to score in the knockout stages.

Also, the midfielder was just 18 years and 288 days at the time. Similarly, the Manchester City youth started his first game for the club in a 2-0 win over Cardiff City.

Accordingly, he became the youngest ever English player to start a Premier League match after Daniel Sturridge.

Following an outstanding performance, Pep Guardiola told the press that Foden would become a vital player for the club in the coming decade.

Phil scored his first Premier League goal, which later turned out to be the winning goal against Tottenham in a 1-0 victory. For this reason, the Manchester City midfielder became the club’s third-youngest goalscorer.

Even though Foden is still only 19 years old, the youngster is breaking several records continuously. With that, the English midfielder is turning out to be the player that everyone wanted him to be.

At the time of writing, Phil has scored 10 goals and provided seven assists in 59 appearances for the Manchester-based club.

Now, let’s take a look at Phil’s international career. His achievements for England are as impressive as club level, if not more.

The gifted Manchester City Midfielder currently plays for the England U-21 team. To date, Foden’s international career highlight to date has to be winning the Golden Ball at the 2017 FIFA Under-17 World Cup.

England U-21‘s won the world cup that year, beating Spain U-21 in the final in which Phil scored two goals. Not only did the player help his side win the world cup, but the Brit also took home the Golden Ball.

Winning the World Cup against Spain was even more satisfying because the same opponents had defeated Foden’s national side in the final of the 2017 UEFA European Under-17 Championship.

Therefore, the English U-21 side saw this as a redemption for their loss in the 2017 UEFA European U-17 Championship.

2017 European U-17 Championship Runner Up

2017 UEFA European U-17 Championship Team of the Tournament

Even though Foden is only 19 years old, the young midfielder already has a son with a girlfriend, Rebecca Cooke. The two have been together since their teen years.

The Manchester City midfielder plans to marry his high school sweetheart soon. Surprisingly, the couple had their child when Foden was 18 years old.

It seems absurd to have a child at that age. But, hey, am I to judge the kid? He earns millions of dollars every year, and I guess millionaires can do anything, right?

Phil is lucky to have a very supportive family as his father, Phil Foden Sr., has always been encouraging his son’s on and off-field activities. Namely, Foden Sr. offered to help Phil raise his child as he was very young.

Claire Foden, Foden’s mother, is as supportive as his father, if not more. Similarly,  she ensured that the England international was adequately looked after and his sister.

Naturally, the two siblings are very close as they were brought up together and are of similar age. The City midfielder knows the sacrifices his family made to make him the talented player he is today.

Therefore, to show gratitude, he bought his family a £2million house in Manchester. Foden and his mum were involved in selecting the house.

In conclusion, we can say that the Foden family is as tightly knit as a family as one can be. They are very caring and supportive of one another. As a result, Foden is a quality person, not just on the field but also on it.

The England U-21 international’s at the moment stands at €3.5 million. All of it has come from his football activities. He signed a six-year deal with Manchester City, which keeps him at the club till 2024.

Half way there! That goal was for you, Richard. 💙 pic.twitter.com/NbIVwjtx4a

Foden is earning £30,000 per week or £1.4 million per year. Throughout his contract, the England international will make around £8.5 million, an eye-watering amount of money.

As of now, the transfer market website has set the transfer value of Phil at $33 million. It is a lot of money for a player who has never made a professional appearance for only one club.

Even though the midfielder lacks experience, he more than makes it up with his skills and ability, as shown by his transfer valuation. Over time,  I expect Foden’s net worth as well as transfer value to rise.

Foden, while playing at the final stages of the EFL Cup tie at Leicester City in 2017-2018, suffered from a ligament injury. He was then substituted by Guardiola.

Likewise, Foden suffered from another injury in June 2020. It was discovered after a fitness test.

Foden believes in keeping up with the hair trends. The dashing footballer is popular for his quirky and dope hairstyles. Here’s a picture of Foden with a barnet haircut:

Moreover, Foden’s quirky haircuts have been subjected to be meme material at times. A few netizens have trolled him while most have loaded him with appreciations at the same time.

Have we all seen Phil Foden's new haircut?

He's going to be balling out for the next two weeks. pic.twitter.com/bOgQ5HkaXt

When it comes to staying fit and healthy, Foden is very strict. He has hired a new private chef Adam Selby since August 2020 who functions with consultations from a specialized sport’s nutritionist.

Foden was not very fond of Salmon before but he has, in fact, started loving it these days. He orders salmon quite a lot so that his omega 3 ratio stays right.

He prefers having pesto pasta as a pre-match meal. The focus remains on iron-rich foods and he also consumes micronutrients.

What are Phil Foden’s major qualities?

Foden on the football ground is a treat to watch. He possesses a lot of good qualities that make him an excellent footballer. Some of them are:

Is Phil Foden a father?

Phil Foden is a father to a beautiful baby body, Ronnie Foden. Ronnie was born in January 2019 when Phil was just 18. He is raising the child with his long-time girlfriend Rebecca Cooke who also happens to be the mother of his child. 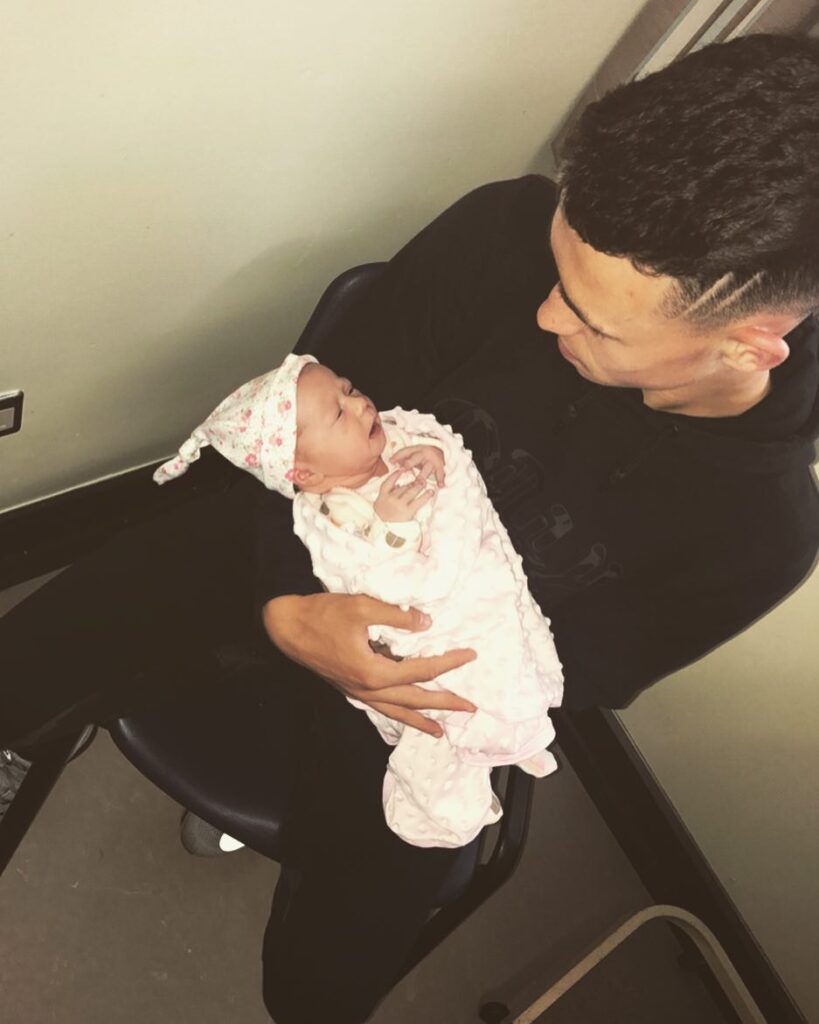